UCLA's Cassius Marsh Floats, But He Also Can Sting 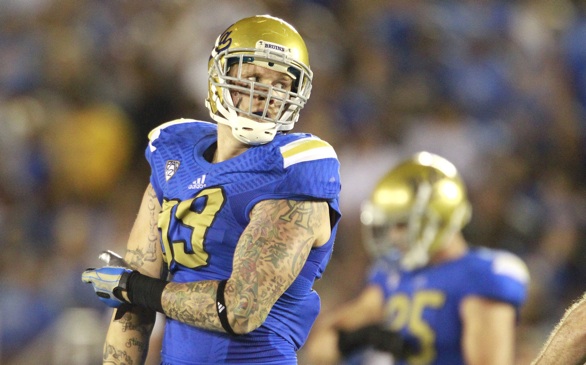 Cassius Marsh carries about him a genteel nature in conversation.

He speaks in a quiet tone, with a slight Cajun accent. He is reserved and easygoing.

The private person doesn't seem to mesh with the wild-man public persona he has developed as a defensive end for UCLA's football team.

Marsh accepts that, and works to suppress a side he can't entirely separate from his personality.

"With passion, when you're upset, comes anger," Marsh said. "Sometimes, when you're young and dumb, you don't know how to control it the right way."

The passion is a Stanford problem this week. Marsh, a 6-foot-5, 260-pound senior, is in his element against a Cardinal team that favors power football.

The control is Marsh's chore, and it is something he has developed since coming to UCLA. Yet, he also lost it momentarily against California last Saturday when a Golden Bears offensive lineman took a swing at him after a play. Marsh swung back and was ejected.

"There is no excuse for my reaction," Marsh said. His short-fuse temper "is one of those things that it is never really fixed," he added. "It's a part of you and you always have to be conscientious."

UCLA Coach Jim Mora said, "I wish people could see him the way we see him, the really fine football player who cares about his teammates. If he could control his passion and emotion a little bit more, people will start to recognize what a really great player he is."

Mora also acknowledged, "Cassius is kind of a wild horse rider at times, and that's OK."

Marsh loved soccer as a kid, but football was inevitable.

Curtis Marsh, his father, was a receiver in the NFL for three seasons. His brother, Curtis Marsh Jr., four years older, is a defensive back with the Cincinnati Bengals.

Marsh's first football memory was as an 8-year old playing on a youth team. He was in a tackling drill, going against the coach's son.

"My dad had showed up that day, so I was extra motivated," Marsh said. "I remember just destroying the kid. Coach made him go again and I looked at my dad and he was like, 'Don't do him like that again.' "

Marsh used less force. "It was the first time I learned how to show mercy on my teammates," he said. "There have been a lot of lessons I have learned from as far back as 8 years old."

"The hardest part of the whole journey for Cassius was learning some people weren't worth their words," LeBlanc said. "Being a single mom, raising a man, I tried to bring around good people. I had to give up some relationships because they weren't a fit for my son."

Football was a fit.

Marsh was a star at Westlake Village Oaks Christian High and committed to accept a football scholarship for Louisiana State. When he had second thoughts about being that far from his mother, he switched to UCLA, but other schools weren't convinced.

Rick Neuheisel, then UCLA's head coach, was visiting Marsh in the Oaks Christian football office when USC assistant Ed Orgeron called to say he was coming over.

"That was definitely an awkward moment," Marsh said, laughing. "He looked at me like, 'You're not going to let them steal you away?' "

Neuheisel left the office but remained in the parking lot, timing how long Orgeron stayed.

"I wasn't changing my mind," Marsh said. "I was very happy with UCLA."

Marsh arms are his history, a colorful collage of overlapping tattoos.

He has his father's name, as well as "mom" and "polar bear," his family nickname. There's also the California flag and his astrological sign. He has added "lover, "team unity" and "float like a butterfly, sting like a bee," a quote from Cassius Clay before he became Muhammad Ali.

"I'm an artistic person," Marsh said. "There are so many things that are important to me. Things I want to remember forever."

Marsh recently added "UCLA" to his right arm. "This place is a part of me," he said.

Yet life in Westwood has had upheavals. As a freshman, Marsh slammed his helmet and shoulder pads to the ground and stormed out of practice. He was suspended for two games as a sophomore for his part in a melee during a game against Arizona.

James Washington, former UCLA and NFL defensive back, took on Marsh, mentoring a young player who was a reflection. "I fit that mold back in the day," said Washington, who played at UCLA from 1984-87. "[Coach] Terry Donahue and I would go at each other all the time. Now he's my best friend."

Marsh, Washington said, "is misunderstood, in a sense. He was raised by a single mom, who spoiled him a bit. He came here to be an outstanding player and play for national championships."

When Neuheisel was fired, Marsh contemplated transferring. First, he said he waited to see if UCLA officials "were going to take it seriously and hire a great coach."

He liked the Mora hire. He liked the assistant coaches Mora hired. He stayed. The hard work was never a problem.

"He came here at 300 pounds and has trouble staying at 260," Washington said. "That's how hard he works.

Marsh had a standout junior season, finishing with eight sacks. He seemed well on his way to a happy ending.

Then came the skirmish against Cal and the reminder, as Washington said, "he still has the red button."

"Sometimes I feel like I belong playing football 20 years ago," Marsh said. "For me, respect is a huge thing. In this day and age, it is not taken as seriously."

Marsh can't control time. He works on things he can, without changing his personality.

"I have learned to focus the energy, but I am the same guy in some instances," Marsh said. "People do something that you shouldn't do, then I'm going to warn them. If you do it again, there is going to be a reaction and you're probably not going to like it."

Michigan and UCLA will play a home-and-home series, with the Bruins traveling to Ann Arbor for a Sept. 10, 2022 game, and the Wolverines coming to the Rose Bowl on Sept. 2, 2023. Michigan holds an 8-3 edge in the all-time football series between the schools, but UCLA won, 23-20, the last time they met, in 2000 at the Rose Bowl.