Get Up & STOMP: Enjoy this one-of-a-kind musical experience (See Below for Special Discounts!) 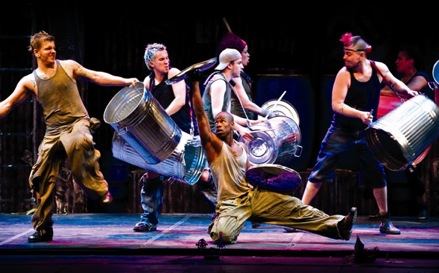 Have you ever found yourself tapping your pencil on your desk, trying to create a beat? We’ve all done it before, but what if I told you that there was a whole show devoted to making musical beats with everyday objects? It’s true; this type of show really does exist, and it’s coming to a theatre near you.

STOMP, the critically acclaimed theatrical performance, is currently on tour and is coming to Los Angeles in December. This is something that you absolutely do not want to miss out on.

Luke Cresswell and Steve McNicholas in Brighton created STOMP in the U.K. in 1991, and over the years it has expanded to worldwide fame. The show has been running continuously at the Orpheum Theatre in New York City since 1994 and has won both Obie and Drama Desk Awards as well.

The show features a group of percussionists who turn the most ordinary household items into instruments. From brooms and trash cans to matchboxes and basketballs, STOMP makes a beat out of anything and everything, creating an indescribable musical experience for the audience!

This hour and a half production is high-energy from start to finish. The show has no verbal exchanges (there’s no dialogue at all!), so everything rides on the execution of the physical and musical aspects of the show. There is also plenty of comedy and audience participation, so you will definitely be entertained throughout the entire performance.

STOMP is spectacular for many reasons, but the cast itself requires special recognition for the mesmerizing performances that they put on show after show.

Eight professional performers carry out the entire show, creating music through diverse technical dance disciplines and advanced rhythmic abilities. The precision that these performers put into every single one of their performances shows the dedication that they have to the theater and to the art of rhythm.

STOMP has received exceptional reviews from critics around the world. The New York Times has called it “a sure-fire crowd pleaser,” and it is described as “hypnotizing” by Village Voice. STOMP is also kid friendly, so you can buy tickets for the whole family. If you're a student, check out the amazing discount offer below!