Charli XCX Sees Red in Her Next Album: An artist by nature, this British songstress combines her artistic creativity with her music. 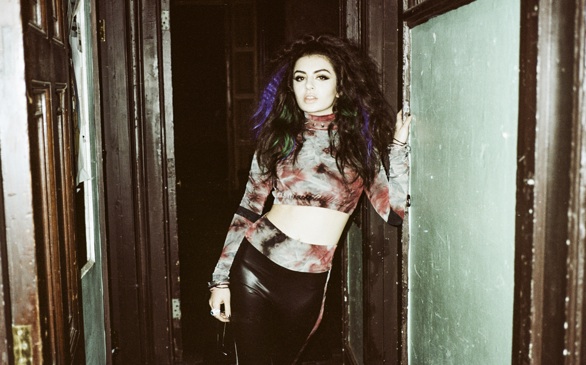 Watch out for this gal - her second album will blow your mind.
(Credit: Dan Curin)

Charli XCX is bringing back the British girl pop era in full throttle. Her passion for art and music makes for a bold, but dark edge. She is ready to give her fans the raw girl power jams that they are looking for.

Campus Circle: Let’s start by telling me what your name is all about?
Charli: So my name is Charli XCX. It’s Charli because that’s my name and XCX because it was my MSN screen name when I was, like, 14, so I picked that because it was just there in front of me, and it means “Kiss Charli Kiss.”

CC: You got started at a young age from Myspace. How would you explain your journey after that, and did you ever think you'd get this famous?
C: So up to the Myspace days I got picked up by this promoter who was working on lots of raves and cocktail parties in London, and I’d play them for a while and I got into that scene. Then my record label started contacting me, and I started writing songs and albums. I didn’t really know what I was doing, but I knew that I liked what I was doing so I just kept doing it.

CC: You loved art and hated music. Do you find those both influencing each other now? What kind of art do you do?
C: Well, at the moment my art that I make is concentrated in my music videos. I do all my music videos with Ryan Andrews, and we work on all of our concepts together and everything in the video together. That’s my main artistic outlet at the moment, besides my music, as well as photo shoots, like directing my own photo shoots and artwork. That’s where I get my visual creative outlet right now.

CC: Who are your musical influences?
C: When I was younger, it was the French electro music scene in Paris around 2007 (all of the Ed Banger Artists like Uffie, Justice, Feadz). Now, I’m really inspired by French Yeah Yeah pop, ‘60s pop like Johnny Holiday, French Gal, Brigitte Bardot, also nu-wave dance like The Waitresses, Bow Wow Wow, as well as French Plastic punk, like Plastic Bertrand. Kind of a wide range, but at the moment I’m really enjoying ‘60s French music.

CC: It seems that you have become inspired from movies such as The Craft and Clueless to artists such as David LaChappelle. How would you say that plays a role as an artist yourself?
C: I’m so visually inspired when I’m creating music, that’s why I do love the directors like Pierre et Gilles and David LaChappelle, and that’s why I’m more drawn to music videos and movies when I’m making it rather than music itself. I feel like I see everything in colors like my first record True Romance…this record that I’m writing at the moment feels like the color red for me. I feel like I connect more to visual artists and music videos than I do to actual musicians.

CC: How was working with Icona Pop? Was there some girl power going on?
C: It was cool. We actually didn’t get in the studio together, but we wrote [“I Love It”] beforehand, and they were into it, and then they came down and sang over what we did and were really feeling it. They breathed this new life into it and made it what it is. It was cool…to have played it live with them and that felt like a real girl power moment – when we did it live.

CC: How would you explain the new sound and theme of your upcoming sophomore release?
C: Like I said, the theme of the record is definitely the color red. It is much more live, there’s much more guitar. It’s very feminine in both a beautiful way and an angry, aggressive way because I feel like femininity is very beautiful, but also angry, aggressive, strong, sexy and shy. It’s everything.

CC: Who is your dream band to tour with?
C: I feel like it would be cool to go on tour with Gwen Stefani. That would be awesome.

CC: What's a typical day like for you?
C: Right now, it’s either being on a plane or in a car for a while and then going to the studio. At the moment, I’m just writing all the time – that’s all I want to be doing right now. So, lots of studio time at the moment; that feels kind of where I’m meant to be right now.

With her North American tour taking off, Charli XCX will be bringing all her glitz, glam and cutting edge pop to the stage at the El Rey in Los Angeles on Nov. 4, 2013.