Matthew McConaughey Leads With His Head, Not His Crotch: The actor talks about upcoming film, Dallas Buyers Club. 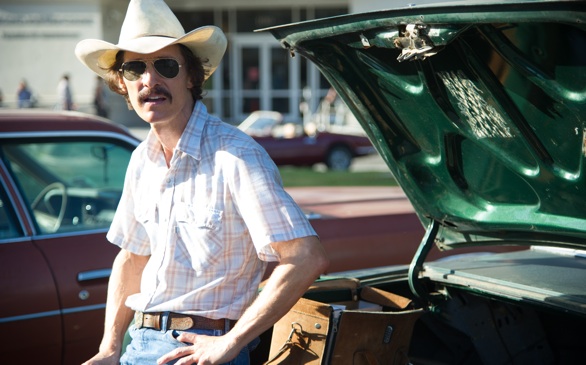 After breaking through in 1993’s Dazed and Confused and then being the surprise choice to play the lead in 1996’s A Time to Kill, Matthew McConaughey, whether by choice or happy accident, has built a career by defying our expectations. With his seemingly effortless charm and good looks, he wouldn’t have been the first actor to be stuck on mediocre rom-com purgatory.

Sure, he would have made a pretty successful living by continuing to star in films such as How to Lose a Guy in 10 Days, Failure to Launch and Fool’s Gold, but that’s like living on a diet of Snickers and Doritos: it’s satisfying in the short term, but you either end up with a stomach ache or raiding the refrigerator in an hour wanting more. And he did want more. He successfully navigated his way from big-budget popcorn movies (Contact, Sahara) to riskier art house choices (Frailty, The Paperboy) to more prestigious, “serious” movies such as Martin Scorsese’s upcoming The Wolf of Wall Street.

His newest film, Dallas Buyers Club, is a combination of risky art-house film and prestigious Oscar bait. In it, McConaughey plays real-life Ron Woodroof, a Texas gold old boy who’s an electrician and rodeo cowboy by day and a hard partier and womanizer by night. His world is turned upside down when he’s diagnosed with HIV in 1985, a time when HIV was widely accepted as just a gay man’s disease. The movie had been in development hell for years, but McConaughey was drawn to the script.

“I’ve been able to read a few scripts and think ‘it might get made, it might not get made’ and keep them around and kick them around every now and then. This [the script], I kept on top of my desk for years and every time I revisited it, I thought, ‘this is the one I want to make,’ but nobody wanted to make it.”

Dallas Buyers Club doesn’t exactly have “feel-good movie of the year” written all over it, so financing the movie proved to be an arduous process. Director Jean-Marc Vallée informed McConaughey that the financing was almost complete, so the actor began his transformation of starting to lose the 40-something pounds for the role before filming was given a green light. After four weeks of extreme dieting, the film ended up receiving the budget it needed to be green lit. Not only did McConaughey transform himself physically, but he also immersed himself in Ron’s life by reading his journals and speaking to his family and friends.

“Before he had HIV, he was sort of lost. I know a lot of those guys who are kind of stuck, not going anywhere. Ironically, when he [contracted] HIV, he found purpose in his life, and that’s when he came to life, so to speak,” he said. “I read his diary [that he started before he had HIV] and he was lonely…and he wanted out, but he had nowhere to go. His family would say that he would sometimes dress as a gangster and I asked, ‘for Halloween?’ but it would just be a [random] Tuesday.”

You never know when life is going to hand you a lemon, and Ron’s pill was a particularly bitter pill to swallow. Not only was he homophobic, but he was also only given 30 days to live after his diagnosis.

“He’s just trying to survive by any means necessary and ends up being a crusader,” said McConaughey. “That’s original. Here’s a guy with a seventh grade education who became a scientist almost, an expert on a disease that many people didn’t know about yet, about how to prolong your life in a healthy way.”

Ron’s extensive research into the government red tape involving the FDA, CDC and the many other government agencies that approve new drug therapies inspired him to become a crusader in the war on AIDS -- not because he was a martyr, but because he wanted to live. He was soon traveling to Mexico and then Germany, Israel and China to retrieve drugs that weren’t approved yet in the U.S. and were less harmful than the widely used anti-AIDS drug AZT, which was the drug of choice in the U.S. at the time. To avoid government sanctions against selling non-FDA approved medicine, they established a "buyers club," where HIV-positive people paid monthly dues for access to the newly acquired supplies.

With his soon-to-be discussed weight loss for the role, McConaughey could relate to Ron’s energy. “Let’s say I lost about 40 percent of my energy and power from the neck down. I gained that 40 percent of that power from the neck up. Some guys lead with their head. Some guys lead from their midsection – their heart. Some guys, and Ron included at first, want to lead with their crotch. Ron did lead with his crotch and that’s both the humor and tragedy of the story,” he said.

With Ron leading with his head, he not only changed the treatment options for generations of people suffering from HIV, he changed the way the government agencies work together to treat people with all kinds of terminal illnesses.

With his challenging role in Dallas Buyers Club, McConaughey is on the short list of actors who could hear their names when the Best Actor Oscar nominations are announced. Awards talk isn’t new for McConaughey, however, as he was also on the short list for a Best Supporting Actor nomination for his, literally, flashy role in last year’s Magic Mike.

He seems to be both humble and unfazed by the acclaim. “It’s wonderful to be in the conversation right now. It’s a wonderful time in my career. I’m excited to get up for work every day,” he said.

If McConaughey keeps pursuing roles with his head and not his crotch, he may be on more Oscar short lists in the years to come.