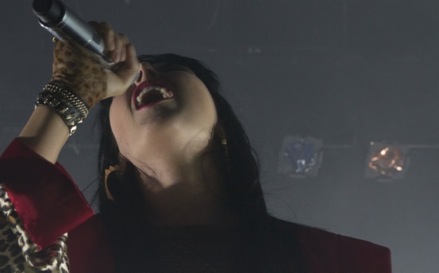 If you thought the buzz surrounding Sleigh Bells had finally worn off after the duo took the music industry by storm more than three years ago with Treats, think again.

So when Krauss and Miller returned to Los Angeles on Friday for a headlining show at the El Rey Theatre, a sold-out crowd eagerly awaited their arrival on stage after American post-rock outfit Doldrums kicked off the night.

What ensued over the next 50 minutes — to no surprise — was a high-octane performance that weaved between Sleigh Bells’ new material and some of its oldies-but-goodies.

With the band’s entrance music blasting full bore over the PA system, Krauss and Miller came out guns blazing, rifling through a 15-song set that started with the heavy-hitting “Minnie” off Bitter Rivals and followed with “Comeback Kid” from 2012’s Reign of Terror.

And the testosterone-fueled audience, featuring its fair share of post-30 metal heads and even one middle-aged individual in a wheelchair, couldn’t get enough. While Miller doled out one distorted guitar riff after another, the animated Krauss made sure we noticed her every twist and turn as she manned the microphone.

But it’s clear at this point that although there are plenty of advocates, Sleigh Bells’ unique brand of thrash-metal pop isn’t for everyone. At times, Miller’s arrangements border more on noise than on melody — a recipe that will rattle your bones if not just your eardrums — and Krauss’ vocal limitations leave something to be desired.

That, nevertheless, hasn’t mattered much to Sleigh Bells fans. Because from the applause they received at the El Rey, Miller and Krauss don’t need to prove anymore whether or not they belong.