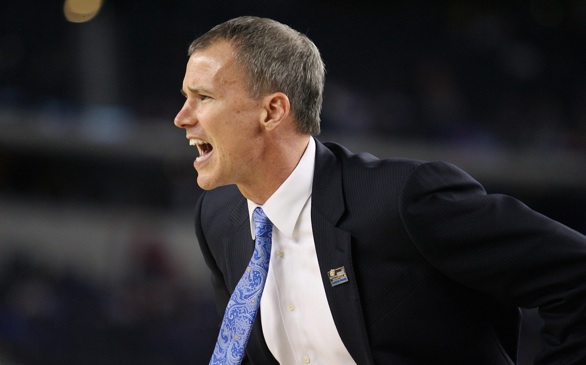 LOS ANGELES — He is a reluctant celebrity, made instantly famous by the exploits of his Florida Gulf Coast basketball team during last season’s NCAA tournament. Now Andy Enfield finds himself living in the city where Kardashians set trends and TMZ shouts the news.

“I was never the life of the party. In fact, I’m still not,” Enfield said recently.

But as USC’s first-year coach and the guy with the former supermodel wife, Enfield is charged with creating a product that can escape the shadows of football on his campus and of basketball at the school across town.

USC hasn’t reached the Final Four since 1954, but Enfield believes players in one of the nation’s most fertile recruiting grounds will embrace the flamboyant “Dunk City” approach his Florida Gulf Coast team rode to the Sweet 16. He interrupted a recent scrimmage at the Galen Center’s practice gym to reinforce that point.

“We play up-tempo basketball here,” he told his players. “If you want to play slow, go to UCLA.”

At 44, Enfield seemingly has moved fast throughout his career. His resume includes assistant coaching stints in the NBA, helping a healthcare software startup grow to a $100 million company, then leaving that world to become an assistant at Florida State.

But Enfield still would be a secret in college basketball had Florida Gulf Coast not made March Madness history in the program’s sixth season at Division I and his second as head coach.

“I didn’t know anything about him,” said Tony Bland, an assistant on Enfield’s staff at USC. “I was like everyone else.”

When the Eagles stunned No. 2 seed Georgetown, then knocked off No. 7 San Diego State, they became the first No. 15 seed to win twice in the tournament.

Instantly, FGCU was big news. More than 150 national media outlets converged on the campus in Fort Myers after the win over San Diego State.

“It was a little overwhelming at times,” Enfield said.

Within a week of FGCU’s ouster at the hands of Florida, USC athletic director Pat Haden signed Enfield to a six-year contract worth $1.55 million per season, according to the Washington Post. That’s 10 times what he made at Florida Gulf Coast.

“Andy has been successful in every area of his life,” Haden said on the day Enfield was introduced as USC’s coach. “Andy’s success at Florida Gulf Coast is not a flash in the pan. Those in the basketball world have known of his abilities for a while.”

Enfield said he wasn’t prepared for the celebrity world he was about to enter, including an appearance on “The Tonight Show With Jay Leno.”

“As far as being in the spotlight . . . my wife and I don’t take ourselves very seriously,” he said. “Being on Jay Leno, that was out of my league.”

Maybe not. Bland, hired by Enfield from San Diego State just weeks after their meeting in the NCAA tournament, said his new boss is comfortable in any setting.

“He was made for it. One of the smoothest people I’ve ever been around. It’s effortless,” Bland said. “He could walk in a room with George Clooney and he’s going to fit in right away.”

Enfield said his ability to move comfortably in different circles is more the result of preparation than an outgoing nature. His wife, Amanda, who did modeling for Victoria’s Secret, Tommy Hilfiger and Armani before retiring to become the mother of their three children, has called her husband the most confident person she has ever met.

He put in the time on the basketball court while growing up in Shippensburg, Pa., and set an NCAA all-division record for career free-throw accuracy (92.5 percent) while earning Academic All-America honors at Johns Hopkins.

He was an assistant under Rick Pitino with the Boston Celtics and later was a shooting coach for the Milwaukee Bucks and dozens of NBA players.

How good was he? When pros challenged him to 3-point shooting contests, Enfield said, “I made more money than I did with my salary.”

Thomas Rizk, founder and CEO of TractManager, got to know Enfield after his son attended a basketball camp that Enfield worked, and “saw some genius in Andy in everything he did,” he told USA Today.

Bland said he never has known anyone so organized.

“We’ll have a meeting where you don’t even know he’s paying attention,” Bland said, “and afterward he’ll have notes for us on everything.”

The business world grew Enfield’s confidence to the point where he was comfortable taking his future wife to Taco Bell on their first real date and financially secure enough to pursue his basketball coaching dreams.

He hung a sign in his old office at Florida Gulf Coast that read, “You miss 100 percent of the shots you don’t take.”

“That means if you prepare yourself, you can be successful, and you’ve got to take the shot,” Enfield said. “That’s how I coach, that’s how I live my life.

If he didn’t take a shot at Florida Gulf Coast—where he took a pay cut from his job at Florida State—Enfield knows he wouldn’t be at USC.

Trojans senior guard J.T. Terrell said everything has been just as Enfield promised—fun, loose and organized.