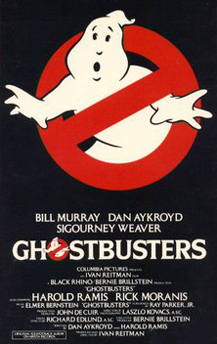 Ghostbusters – which also stars Sigourney Weaver, Rick Moranis and Annie Potts – tells the story of three unemployed parapsychology professors (Murray, Aykroyd and Ramis) who team up to start their own venture. When they’re kicked out of a cushy New York-based university, they begin their own, unique business in an abandoned Fire Station.

Instead of simply studying the occult, they decide to offer their services for money. In exchange for a hefty fee, they’ll stroll the streets of New York City locating and trapping ghosts, spooks and other haunts. What really makes the movie stand out, though, is when the guys end up discovering an entrance to another dimension and they must do whatever they can to prevent all-out hell from unleashing itself on New York.

Ghostbusters screens at midnight on Jan. 13 at LA’s Nuart Theater. The Nuart is located at 11272 Santa Monica Blvd., just west of the 405 Freeway, in West Los Angeles, (310) 281-8223. For ticket information and more details about The Nuart’s "Cine Insomnia" series, visit www.landmarktheatres.com.
Article posted on 1/10/2006
This article has been viewed 2711 times.