Tuition Increases at US Public Colleges at Lowest Rate in Decades 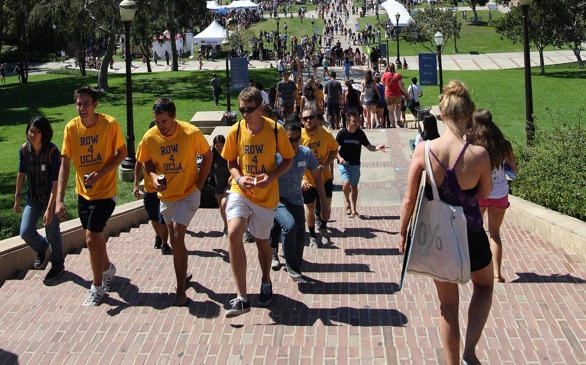 LOS ANGELES _ The rise in tuition at public colleges slowed this year to the smallest increase in more than three decades, although financial aid has not kept pace to cover the hikes, according to a College Board study released Wednesday.

At public four-year colleges and universities across the country, the average price for tuition and fees rose 2.9 percent this year _ the smallest annual rise in 38 years _ to $8,893 for in-state students, the report said. Room and board adds about $9,500.

However, analysts urged students and families to pay closer attention to what they described as the more important figure: the net average cost after grants, tax credits and deductions. That was $3,120, up from $3,050 last year, for average net tuition and fees at four-year public colleges.

"It does seem that the spiral is moderating _ not turning around, not ending, but moderating," said Sandy Baum, a co-author of the College Board study and research professor at George Washington University.

Baum said that the relatively small increase, while still above the general 2 percent inflation, was good news and that she hoped it will encourage more students to enroll in college and apply for financial aid.
The tuition hikes at four-year public colleges from 2010 through 2012 had averaged 7.9 percent, 8.5 percent and 4.5 percent, respectively.

California contributed to this year's national slowdown: the University of California and California State University systems froze tuition for the second year in a row after sharp increases for 2011.

At private nonprofit colleges, the average sticker price for tuition and fees was up 3.8 percent, to $30,094. That was a bit less than the rise of at least 4 percent in each of the previous three years. The much lower net cost, what students actually pay, averaged $12,460 after grants and tax benefits, up $530 from last year, the College Board reported. Room and board at private schools average about $10,820.

Both public and private colleges have faced more pressure from the public and federal government to keep costs down, said economist Jennifer Ma, a co-author of the report. "Obviously, they have been mindful of that," she said. For example, President Barack Obama has proposed a new college rating system that takes pricing and financial aid into account.

Plus, with the recession receding, some state governments have started to restore higher education funding that had been cut after tax revenues shrank five years ago, experts said. California voters last year, for example, approved Proposition 30, which increased some taxes that helped avoid tuition hikes.

Once again, the annual College Board survey highlights California's two-year community colleges as the best bargain in the nation, with tuition and other fees for state residents averaging $1,424, compared with $3,264 nationwide.

UC's $13,200 in tuition and campus-based fees this year is above the $9,804 average at all doctoral degree-granting public universities, while Cal State's average $6,695 is below the $7,750 for master's degree institutions nationally.

A related College Board report tackled the controversial issue of rising student debt as part of the overall aid package. College Board President David Coleman said that too many students may be scared away from college by fears that education loans would be impossible to pay off when, he said, most college graduates are able to manage those payments.

According to the report, 57 percent of graduates of public four-year colleges in 2011-12 had school debt, with the average at $25,000. That amount is 22 percent higher than the load carried by graduates a decade ago.

At private nonprofit colleges, 65 percent of 2011-12 graduates had debt averaging $29,900, which was 24 percent more than a decade ago. Those figures do not include students who transferred into the colleges.
Coleman estimated that such loads would require payments of about $300 a month over 10 years, which he believes is manageable and worthwhile given the boost in income that most people receive over the long haul by earning a college degree.

"I don't diminish the concerns," he said. "But I want to be clear that a college education is one of the best investments a student or their families can make in terms of health, income and upward mobility."

Debbie Cochrane, research director for the Institute for College Access & Success, which pushes for college affordability, said that because many recent graduates are having a hard time finding well-paying jobs, many are straining to make their payments and are postponing car and house purchases and marriage as a result.

"It really is a signal of the financial toll the debt is taking," Cochrane said.
Students and parents should beware of colleges that show high loan default rates among their former students.

"That may show they have to question the quality of the education being provided," Cochrane said.
___
(c)2013 Los Angeles Times
Visit the Los Angeles Times at www.latimes.com
Distributed by MCT Information Services