A One-of-a-Kind Competition, Donna Summer & Christmas Albums in the Works 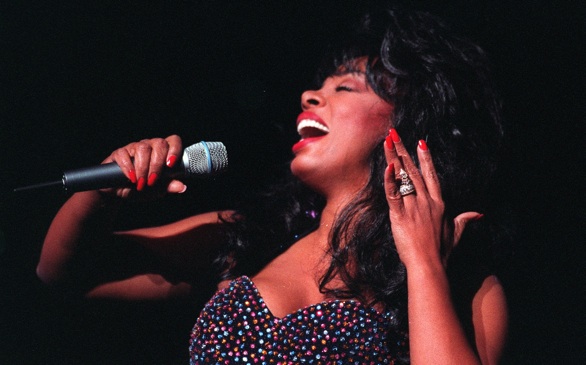 Donna Summer performing in L.A. in 1995. The Queen of Disco died in 2012 after a battle with cancer.
(Credit: Kirk McKoy/Los Angles Times/MCT)

BREAKOUT ARTIST MUSIC COMPETITION
Now underway, the Breakout Artist Music Competition is an online music competition in search of aspiring bands and artists. Entrants can submit one song for free (additional entries are $20 per song), and there are nine categories to choose from, including rock/alternative/punk, rap/hip-hop/R&B, Christian, indie/folk and electronic/experimental. The grand prize winner will get a package that includes a management contract, photo shoot, full-production music video, three-song E.P. made with a nationally-known producer, 1,000 copies of the finished CD, $1,000 cash and more. Prizes will also be awarded to a winner and runner-up in each of the nine categories. Judging the competition will be Rob Thomas of Matchbox Twenty, Randy Blythe of Lamb of God, Rick DeJesus of Adelitas Way and other luminaries. Entries must be in by Nov. 30, and winners will be announced in December. Details at http://breakoutcompetition.com/enter/

DONNA SUMMER REMIX ALBUM
A selection of songs made famous by late disco queen Donna Summer have been remixed by some of today’s hottest producers for a just-released album called Love to Love You Donna. Included are Afrojack’s take on “I Feel Love,” Hot Chip’s interpretation of “Sunset People,” Frankie Knuckles and Eric Kuppe’s reimagining of “Hot Stuff” and Laidback Luke’s remix of “MacArthur Park.” The legendary Giorgio Moroder tackles the classic “Love to Love You Baby.” Duke Dumont, Gigamesh, Benga and Jacques Greene are among the other contributors.

DIR EN GREY MEET AND GREET
Japanese band Dir En Grey will participate in a meet and greet Nov. 24 at 1:00 p.m. at SoundCheck Hollywood, located at 8872 Sunset. The first 120 people who purchase the band’s new E.P. The Unraveling (for $22.50) will be able to meet the band and get their CD autographed. To see Dir En Grey play live, plan on being at the L.A. House of Blues on Nov. 24.

ORBE ORBE
Not many artists can claim that they’ve produced a shadow puppet opera and been featured on a host of hip-hop recordings by the likes of Abyssinian Creole, Moko Only and Gabriel Teodros. Spoken word poet, songwriter, folk band front woman and pop queen Cristina Orbé  has indeed accomplished these things, and now the multi-talented singer has her first album out. Released under her stage name Orbé Orbé , the eclectic Invisible Kingdom features nine tunes highlighted by whimsical numbers such as “Circus Star” but also Alanis Morissette-recalling rockers such as “Escape.” www.orbe-orbe.com

BAD RELIGION, FEARLESS RECORDS READY FOR CHRISTMAS
Epitaph Records has announced an Oct. 29 release date for Christmas Songs by Bad Religion. The album will contain punk rock interpretations of classics such as “White Christmas,” “Little Drummer Boy” and “O Come All Ye Faithful” along with an Andy Wallace mix of the band’s own “American Jesus.” Dropping on Nov. 5 will be the Punk Goes Christmas compilation from Fearless Records. Among the contributors will be New Found Glory, Yellowcard, the Ready Set, Crown the Empire, All Time Low, Man Overboard and Jason Lancaster of Go Radio.

L.A. BANDS MAKING NEWS
They’ve been garnering a following based on their live performances; now you can listen to THE VIM DICTA anytime thanks to their just-released E.P. Von Tango. Hard rockers GEMINI SYNDROME have a new album out called Lux and a new lyric video for current single “Stardust.” Underground scenesters DANCE HALL PIMPS will release their sophomore effort The Dead Don’t Walk on Nov. 5. Identical twins Fletcher and Wyatt Shears, the O.C.-based duo also known as THE GARDEN, have a debut album out called The Life and Times of a Paperclip. Also from Orange County, electro poppers NEO GEO have released a single called “One Night Stand” to preview their album Digital DNA, due Oct. 29. Psychedelic rockers SPINDRIFT have just released a new one called Spindrift: Ghost of the West. And congratulations to THE CEREMONIES -- their new self-titled E.P. has just dropped, and MTV has named them an Artist to Watch.