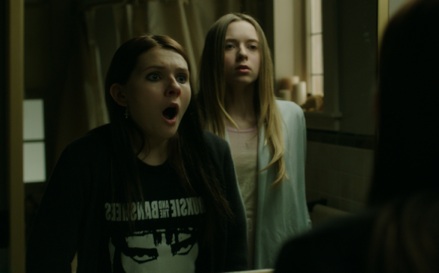 How many reverse ghost stories, where the living sort of haunts the dead, can you think of? The Others and Beetlejuice are a few that kind of (maybe) fit this description, but Haunter is perhaps truly the most original reverse ghost story film.

In Haunter, teenager Lisa (Abigail Breslin) is stuck in her family’s house with her father, mother and little brother after they have all died. In this after-life, purgatory-like stage, Lisa and her family experience déjà vu every day. Every. Single. Day. Each day is the day before Lisa’s sixteenth birthday. She wakes up, goes downstairs, her mom makes pancakes, she’s asked to do laundry, the family has meatloaf for dinner, and she plays “Peter and the Wolf” on the clarinet before she goes to bed. The dialogue and the actions are almost completely repetitious.

Although Lisa is aware that she and her family are dead and “living” a fake life, her mother, father and brother are completely clueless. As far as they know, every day is a new day. It is as if they are sleepwalking.

One night, Lisa interacts with the living: a family of four that presently resides in Lisa’s house. As she begins to uncover why she has been able to contact the family’s oldest daughter, Olivia, Lisa discovers unimaginable truths of how she and her family died and the sinister haunter that presides over her house. As she realizes what’s really going on, Lisa must find out a way to save Olivia’s family from suffering the same fate as hers before it’s too late.

Haunter is more puzzling than scary. There aren’t any earth-shattering twists, but I was definitely scratching my head the whole time asking a bunch of questions: “How is Lisa able to connect with Olivia?” “What’s happening to Olivia’s family?” “What happened to Lisa’s family?” “Who’s that strange telephone repair man?” The film slowly answers each question, but it’s good fun to sit there and guess the reasons for each spooky incident.

As for the scary factor, there are a couple of “gotcha!” moments where you didn’t expect sudden, fast movements or screams. There are also a few unsettling images. However, it is the actual storyline that is most disturbing and frightening. Imagine living in a déjà vu world where you’re forced to live the same day, day after day. That’s true horror; that would be my own personal hell.

Breslin has done scary (Signs, 2002) and thriller/suspenseful films (The Call, 2013) before, and it’s not a surprise that she performs fairly well in this new film. Quite frankly, it’s incredible to see Breslin as a young adult actor. Her focus and commitment to her character, Lisa, is remarkable. There is one emotional scene where Lisa believes she has lost her family for good – your heart might break a little as she collapses to the floor and starts bawling.

With talented writing and impressive acting, Haunter is a film I wouldn’t mind seeing with a group of girlfriends before Halloween. Even though it won’t necessarily scare the living daylights out of you, the film is an enjoyable puzzler that many will undoubtedly appreciate.