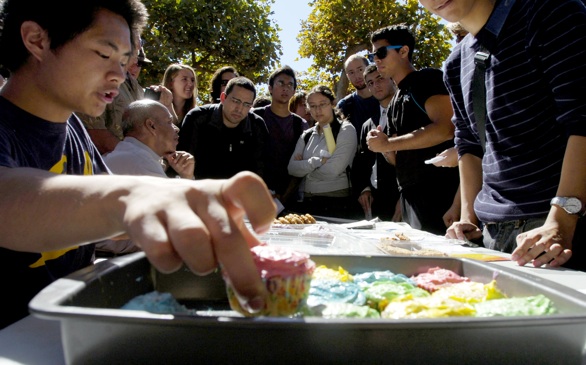 Affirmative action bake sales are nothing new; this one was held at UC Berkeley in 2011.
(Credit: Kristopher Skinner/Contra Costa Times/MCT)

The debate over whether or not affirmative action should be used in college admissions has been a controversial topic within the last few years. Numerous college groups across the U.S. have protested against affirmative action by putting on bake sales where food prices are based on race and ethnicity. Now, a student organization is bringing this kind of bake sale to the University of California, Los Angeles (UCLA).

UCLA's Young Americans for Liberty will be holding an affirmative action bake sale on Friday, Oct. 25 at 11 a.m. on Bruin Walk, according to a prepared statement released by the group.

In 1996, California scrapped affirmative action and banned state schools from considering race in the application process by passing Proposition 209. Since then, "the number of underrepresented students admitted dropped precipitously," according to the Daily Bruin. Groups have since been advocating the repeal of the proposition.

Last week, more than 100 UCLA students marched in support of affirmative action, in an attempt to increase diversity at the campus. They protested against Prop 2, "a Michigan ballot measure that bans race-conscious university admissions." The Supreme Court began hearing arguments on Oct. 15 about whether or not voters should be allowed to ban consideration of race and other factors in public education and public employment. The students involved in the march reportedly held signs that read, "We’re fired up; can’t take it no more” and “UC, UC, can’t you see, we need more diversity.”

"The UCLA Student Government seems to want to turn back the clock on civil rights. We’ve come so far by treating people as individuals here in California and it is an insult to the hard work of so many Bruins of color that their achievements would be better rewarded by grouping people based on race," said the group's officer, according to the statement.

Even though some members of the UCLA faculty and staff have requested that the group cancel its event, it has refused to do so.

Young Americans for Liberty's president said in the statement, "If people find the Affirmative Action Bake Sale offensive, then they should really take offense to Affirmative Action policies that violate our civil rights. It would be even more offensive if the law treated students like this when it came to college admissions, and we know that most Americans feel the same way."