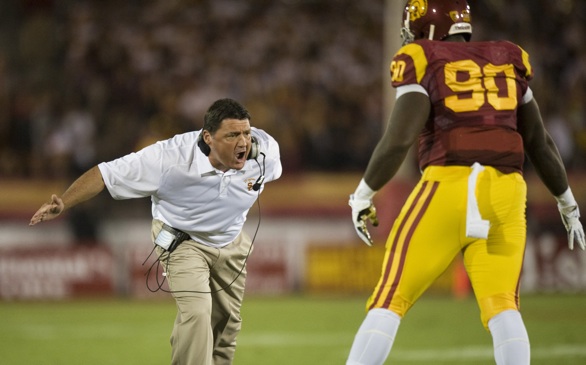 Ever since Ed Orgeron replaced Lane Kiffin as USC’s coach, there’s been a change in the Trojans’ recruiting philosophy.

Instead of focusing mostly on can’t-miss prospects, Orgeron’s decided to increase recruiting in Southern California and take commitments from players who were not highly rated by recruiting services.

In the past two weeks, safety Uchenna Nwosu of Narbonne High School in Harbor City and linebacker Olajuwon Tucker of Serra in Gardena committed to USC. Nwosu was offered by Oregon State, Wyoming and Portland State, and Tucker by mostly lesser Pacific-12 Conference schools along with San Diego State and San Jose State. Miami was the lone marquee program to offer Tucker.

These commits might raise eyebrows, but it is apparently part of a strategy Orgeron used at USC under former coach Pete Carroll. Orgeron signed players like defensive tackles Mike Patterson and Kenechi Udeze, who were not initially considered big-time prospects but became successful players.

The Trojans’ depth issues might also necessitate taking more recruits. USC loses four outside linebackers after this season so Tucker might get a chance to play.

Under NCAA rules, Orgeron cannot comment on individual recruits. But with only 39 of 53 players who played against Notre Dame healthy at the end of Tuesday’s practice, Orgeron was asked if he regretted Kiffin’s decision to save five scholarships from last year’s recruiting class?

“Yeah, but we should have had a better backup plan,” Orgeron said. “There were some guys we could have took but we said, hey, let’s wait until next year and get better players.”

Linebacker Lamar Dawson suffered a season-ending knee injury during Tuesday’s practice, Orgeron said. Dawson limped off the field but did not need assistance so the injury was not originally considered that serious.

Orgeron said USC will “need to practice smart” the rest of the season to avoid injuries. But he does not want to use them as an excuse.

Josh Shaw is officially back at cornerback this week. He alternated between safety and cornerback throughout the season.

Shaw said he is not completely comfortable playing cornerback yet but understands he needs to help the Trojans at their weakest spot.

There is a competition this week in practicing for the kicking job, but starter Andre Heidari is the favorite.

“Recently I’ve been lost in swing,” Heidari said. “My confidence is still there but I’m in a funk.”

Heidari made a 52-yard field goal against Hawaii to open the season but is 5 for 10 since that kick.

“I thought I started off pretty well but I’ve gone downhill,” Heidari said.