Kings Race Ahead, Then Must Rally Past the Yotes 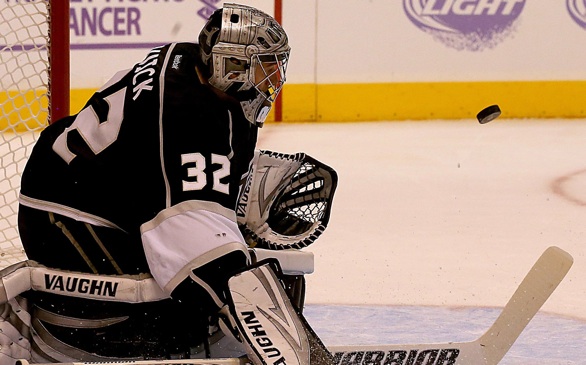 LOS ANGELES—The Los Angeles Kings’ worst droughts came to an end Thursday on a night they also stopped a collapse against the Phoenix Coyotes.

Centers Anze Kopitar and Mike Richards scored their first goals of the season and Matt Frattin scored for the first time as a King in the 7-4 victory at Staples Center.

Dwight King punctuated the victory with an empty-net goal that gave him his first career hat trick.

“It went up and down — giving it up before we got back to how we play,” King said. “You refocus, go back to basics, calm yourself down and get back to playing the game.”

Richards’ and Frattin’s goals came earlier in the third period, sparing the Kings (7-4-0) further indignity after they seized a 4-0 first-period lead and watched it all vanish.

Phoenix made it 4-4 by scoring twice in the first 2 minutes 50 seconds of the third period on a deflected power-play goal by Martin Hanzal and a long, low-skidding shot by Coyotes captain Shane Doan that slid past the right leg pad of Kings goalie Jonathan Quick.

The situation was at its most dire when Kings defenseman Jake Muzzin was called for a slashing penalty 41 seconds after Doan’s goal.

“It was awful that we let them back in the game, but when a team comes back that dominantly, the leading team just folds completely,” Kings defenseman Drew Doughty said after being plus-three on the night. “We didn’t. We stayed strong, got a goal back and insurance.”

Richards keyed the resurgence by stealing the puck from Coyotes forward Radim Vrbata and giving the Kings their third short-handed goal of the season, beating Phoenix goalie Thomas Greiss to his left.

Richards slapped the glass with emotions of exasperation, celebration and relief all evident after he scored a 28th career short-handed goal that ties him for the most among active players with Martin St. Louis of Tampa Bay.

It wasn’t supposed to be that tight after Kopitar whipped in a shot 42 seconds into the game to ignite a four-goal first period.

Kopitar had gone 26 regular-season games without a goal, his last having been scored March 25 at Chicago.

In their 11th game of the season, the goal was also the first by a Kings center.

Centers Kopitar, Richards, Jarret Stoll and Colin Fraser had taken a combined 59 shots before Kopitar reacted to getting stuffed by Phoenix goalie Mike Smith by collecting the puck seconds later to score on a power play, because of holding on Phoenix’s Antoine Vermette.

Kopitar then added his ninth assist, collecting one on King’s first goal 4:17 into the game.

Fraser followed by picking up his first point of the season, pounding a shot that bounced off Smith and was rebounded into the net by Kings forward Jordan Nolan with 9:46 still left in the first.

Smith gave up another goal when Kings defenseman Robyn Regehr unloaded a shot that deflect-ed off King’s stick for a 4-0 lead.

Phoenix (6-3-2) had scored at least a point in seven consecutive games before Thursday.

When the second period began, Coyotes Coach Dave Tippett pulled Smith and replaced him with Greiss.

Greiss stopped all 12 Kings shots in the second and the Coyotes scored two goals off Quick.