UCLA Still Has Shot at Playing in Rose Bowl Game 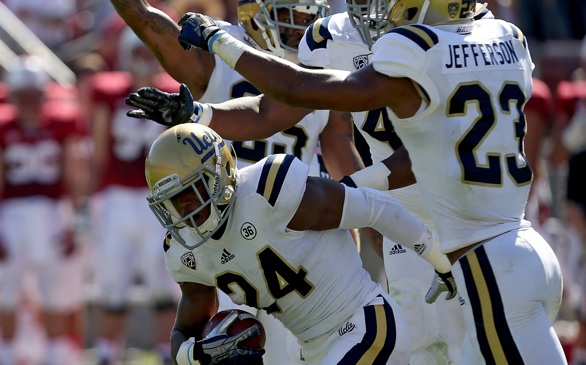 After losing to Stanford and Oregon, does UCLA still have a shot at the Rose Bowl?
(Credit: Luis Sinco/Los Angeles Times/MCT)

LOS ANGELES — There was a time, not so long ago, that UCLA’s season would have been reduced to some pretty poor holiday vacation destinations.

The Hyundai Sun Bowl, Gildan New Mexico Bowl and Valero Alamo Bowl, and others, are still on the children’s table. But the Bruins can still be home for the holidays, thanks to college football expansion.

Reincarnation, and a Rose Bowl bid, will await in the Pac-12 Conference championship game Dec. 7.

All the Bruins have to do is get there.

“That has to be our idea,” UCLA coach Jim Mora said. “I’m a one-game-at-time guy, but we might have to look at it as ‘how do we get back to the Pac-12 championship game?’ We have to win five games.”

The Bruins fate would have already been determined in the pre-expansion alignment after a 42-14 loss to Oregon on Saturday. UCLA would have been tied for fifth in the Pac-12, with a path to the Rose Bowl pretty much requiring that Oregon and Stanford lose three games.

With the conference split into two divisions, the Bruins control their destiny in the South Division, where four of the six teams are within a game of each other.

“Every now and then, I’ll peek ahead and we have some really big division games coming up,” Mora said. “It seems to me, while every game is important, it is weighted a little bit more toward your division games, and the South is going to be tight.”

Almost anyone has a shot.

That was made clear two seasons ago. UCLA was 6-6 coming off a 50-0 loss to USC and had already fired its coach. Still, the Bruins needed only to beat Oregon in the conference title game to go to the Rose Bowl.

Of course, they didn’t. But they had a chance.

The reality of the Pac-12 these days is division games matter more than games with national implications. The North has the powers with No. 2 Oregon and No. 6 Stanford. The South is wide open.

Last season, UCLA parlayed a 5-0 record against the South into a spot in the title game. The Bruins were 1-3 against the North. They then came within a play or two of getting to the Rose Bowl, losing to Stanford, 27-24.

This season, someone from the weaker South will again get a shot at the Rose Bowl.