Lakers Hope They're Better Off Without Howard 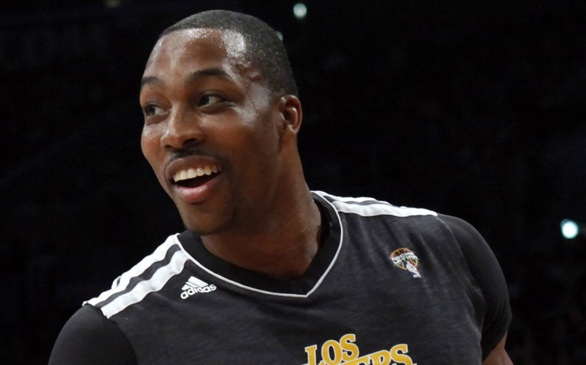 A towering presence loomed over the Lakers last season, and it didn’t just involve Dwight Howard.

It included everything around him.

There was never-ending uncertainty on whether he’d remain a Laker or just use his lone year in Los Angeles as a pitstop before pursuing something else; Howard’s constant frustration that Mike D’Antoni’s fast-paced, pick-and-roll-heavy offense contradicted his hope for a larger post and defensive presence; personality clashes between Howard’s cheerful demeanor and Kobe Bryant’s demonstrative personality.

That tension evaporated as soon as Howard left this offseason via free agency to the Houston Rockets. But with the Lakers lacking a franchise player following Bryant’s career and a defensive presence that once earned Howard the NBA’s Defensive Player of the Year three times, the purple-and-gold’s championship prospects may have evaporated too.

The Lakers may have a good-riddance attitude toward Howard’s departure. Bryant claimed, “I really don’t give a (hoot)” on whether he stayed.When a reporter asked D’Antoni a question about Howard during training camp, the Lakers’ coach answered “Who?” Lakers guard Steve Nash noted both the franchise’s fan base and the team immediately “moved on” from Howard’s departure.

Yet, the Lakers have shied away from arguing they’re experiencing an addition-by-subtraction scenario.

“I don’t think you can blame one guy. We’re all in it together. It was just a tough situation,” D’Antoni said. “But when the chemistry is right, roles are defined and everybody accepts their roles, then you have a chance to win. When things aren’t accepted or there’s not a great chemistry, it makes it very difficult, I don’t care how talented you are. In that aspect, we hope to be better.”

For that to happen, the Lakers have plenty of work in filling Howard’s void.

Through eight preseason games, opponents have outrebounded the Lakers by an average of 49-41.

“That’s a big absence for Dwight leaving,” Lakers forward Jordan Hill said. “We got to keep moving. He made his decision. I respect him for it. But we got to focus on the guys we got now. We’re not letting that bother us or letting it get it to us.”

Things didn’t work out for the Lakers this offseason when Howard ignored their billboards all around Los Angeles pleading for him to stay. But despite limited resources stemming from harsher luxury-tax penalties for high-spending teams, the Lakers still found a number of players on one-year deals that filled specific needs.

The Lakers acquired speed in the form of former Cleveland High and USC product Nick Young and former Woodland Hills Taft and UCLA standout Jordan Farmar, both of whom had strong friendships stemming from their Los Angeles roots. The Lakers gained length by signing swingman Wesley Johnson.

The point guard depth with Farmar and Steve Blake makes D’Antoni more inclined to rest Nash as he tries to avoid last season’s injury-plagued campaign in which he missed a combined 32 games because of a broken left leg and ailments in his back and right hamstring.

Young’s ability to score in bunches gives the Lakers another player capable of creating his own shot for however long Bryant stays sidelined as he rehabs his left Achilles’ tendon.

“We filled the holes where we were weak at with the length, athleticism and to cover the ground, especially defensively,” Bryant said. “You have guys with length and speed that can close out shooters that can shut down and close out on penetration. It makes a big difference.”

The Lakers also expect that their frontline production will make a big difference by pairing veteran center Chris Kaman with Pau Gasol, who posted career lows last season in points (13.7) and field-goal percentage (46.6 percent) because of ailing knees and a reduced role as a facilitator both to mitigate Howard’s post limitations and appease him to stay.

A healthier Gasol will have a bigger role inside with Kaman, who remains dependable in the post, on mid-range jumpers and pick-and-rolls.

“He’s not just a big guy who will be in the middle of the lane operating in the post or the elbows,” Gasol said of Kaman. “So his versatility, knowledge of the game and unselfishness really helps our combination work well.”

Meanwhile, the Lakers describe themselves as a closer-knit group. With exception to Gasol training in his native Spain, all players participated in informal workouts at the Lakers’ facility leading into training camp. The Lakers’ nine-day trip last week to China featured chances to bond, including an array of team dinners and walk through the Great Wall.

Can the diminished drama, a full training camp under D’Antoni, a healthier roster and a deeper bench offset the Lakers’ drop in talent stemmed from Howard’s departure?

“We’ll see. That’s what we got to go in and prove,” Lakers guard Steve Nash said. “It’s definitely going to make a difference. It’s just a matter of how much if it’s enough. We have to go out and prove it and play with a chip on our shoulder.”

And with the Lakers encountering another tough situation with a drop-off in talent, they remain determined in overcompensating elsewhere.

“We’re having great communication with each other and understanding the weaknesses of each other,” Bryant said. “Chemistry is always the biggest thing. It’s always the most important thing. If chemistry is not there, no matter how much talent you have, it’s going to be a struggle.”