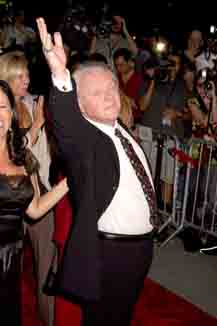 After winning a rash of critics’ awards in recent days, the so-called gay cowboy movie has shifted center-stage in Hollywood with seven nominations for the Golden Globes, three more than George Clooney’s Good Night, and Good Luck, Woody Allen’s Match Point and Susan Stroman’s The Producers.

That whooshing sound you hear is the air being sucked out of the sky over America’s red states. Get ready for a renewed how-dare-they assault on liberal Hollywood.

The Golden Globes, whose annual telecast is a cash cow for the ragtag Hollywood Foreign Press Association, may have little street cred with critics, filmmakers or knowledgeable movie buffs. But, as the dress rehearsal for the Academy Awards, it is the second-most-important player in the game.

Globes can’t rule anything in or out, but as linchpins of multi-million-dollar Oscar campaigns, they can be a major influence on Academy voters.

On that score, the big losers of the day were Terrence Malick’s The New World, which was shut out, Steven Spielberg’s Munich, which received just two nominations, and Rob Marshall’s Memoirs of a Geisha, also with two.

Peter Jackson, whose King Kong figures to be 2005’s box-office champion, had to settle for nominations for his direction and James Newton Howard’s musical score.

There were no real outrages – by inclusion or exclusion – in the acting categories.

I would like to have seen Tommy Lee Jones (The Three Burials of Melquiades Estrada) nominated as best dramatic actor over phone-thrower Russell Crowe (Cinderella Man), but it’s a close call. And I have no reservations over the presence on that ballot of Heath Ledger (Brokeback Mountain), Philip Seymour Hoffman (Capote), Terrence Howard (Hustle & Flow) and David Strathairn (Good Night, and Good Luck).

As usual, the Globe voters used their second best-picture category (for musical/comedy) as a spillover bin for dramas. It’s on the ballot for best musical/comedy actor where you find Joaquin Phoenix, heralded for his dramatic performance in the biographical drama Walk the Line.

Phoenix’s co-star, Reese Witherspoon, is on the women’s musical/comedy ballot.

In any case, the developing story coming out the critics’ awards and Golden Globe nominations is the strength of Brokeback Mountain, which covers 20 years of the secret love life of two married cowboys in the modern West.

The film’s embrace by critics and Hollywood insiders will doubtless fuel attacks on so-called liberal elites by religious groups and garden-variety homophobes. It is to be hoped that some of the people incensed by the movie and its honors see it before they attack.

Distributed by Knight Ridder/Tribune Information Services.
Article posted on 1/12/2006
This article has been viewed 1653 times.