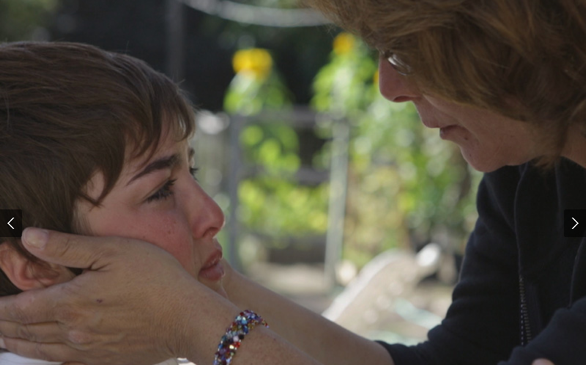 'Time of Death' is a heartbreaking series on what it's like to face your impending death.
(Credit: sho.com)

"Time of Death" is a new documentary series by Showtime that takes viewers to places of tough choices and difficult circumstances. These heart-wrenching episodes tell stories about people with cancer.

Each segment begins with a light introduction in which people reveal what kind of cancer they have and talk about their life and background.

Throughout the course of approximately 60 minutes, each story is told honestly and openly. The cameras are almost always rolling, even when a person receives treatment and says goodbye to their families. They are honest in sharing the good and bad things about their lives, such as drug addiction and infidelity, but they remain as positive as possible during this difficult process.

Maria is a single mom with three kids: Nicole, 25, Julia, 15, and Andrew, 14. She had a pain in her side for two years, which turned out to be breast cancer. Maria manages to keep a positive attitude and sets a good example for her kids. Showtime takes viewers through her journey that includes receiving chemotherapy and radiation, revising her will and interacting with her children. Her daughter, Nicole, is a main focus of Maria’s story because she plans to take care of her younger siblings once her mother passes.

Stay tuned for Michael, a man who was in the Navy for 12 years. He was diagnosed with cancer in his muscle’s connective tissue. With only months to live, his parents stay by his side, hoping for a peaceful death. He is even reunited with a special someone during this portion of the documentary.

One other person is Lenore, a woman in her mid-70s who was diagnosed with pancreatic cancer. She said she has lived a great life and doesn’t want to go through any treatment. Her positive attitude is inspiring, as she shows her strength and contentment.

"Time of Death" may have its highs and lows, but it shows cancer patients that they are not alone. This show will unite those with cancer and persuade the audience to stay healthy and informed about this disease.