In the Name Of 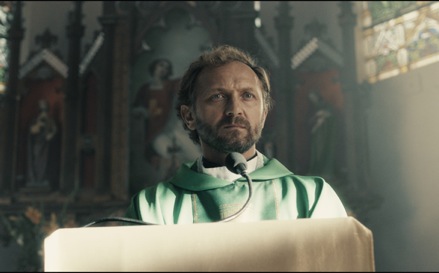 Adam (Andrzej Chvra) in In the Name Of.
(Credit: Courtesy of Film Movement)

Homosexuality in the Catholic church may not be something new to us, but I guarantee we have never seen a film quite like In the Name Of.

Directed by Malgoska Szumowska, In the Name Of tells the story of a Catholic priest, Adam (Andrzej Chyra), who lives in rural Poland where he works with teenage boys who have behavioral problems. Some of them have criminal backgrounds, foul language and engage in drinking, smoking or drugs.

Adam loves the boys and works to help refine their behavior. In doing so, he embraces his priesthood and vows a life of abstinence. Besides working with the boys, you will find him in service or jogging as he represses his inner struggles. However, Adam eventually finds himself battling his sexuality and sexual urges when he meets and falls for Lukasz (Mateusz Kosciukiewicz), the strange and quiet son of a rural family.

Immediately, one might assume that this is a story about a pedophile, but it’s not. Although Adam is facing the truth about his homosexuality in a setting surrounded by young boys, he is not a predator. Szumowska succeeds in not portraying her protagonist as one of those stereotypical predatory priests that we hear about in the news.

Lukasz is not a boy; he is a young man, and we don't seem him as prey for Adam. However, Lukasz does have this sort of innocence to him that might cause the viewer to become conflicted about whether or not he is a victim, simply because he is just so...simple. Still, it's impossible that after watching this film, one will conclude that Adam is a villain.

Instead, through Szumowska’s careful lenses, we are given the rare opportunity to experience the inner struggles of someone who is feeling the heavy burden of abstinence and “forbidden” desires. There are raw feelings of repression, loneliness, despair and bliss. It’s truly a brilliant film that evokes a range of emotions that we have all witnessed or, perhaps, experienced first-hand.

Adam’s character is complex, and Chyra is remarkable in his portrayal. The Polish actor embodies a priest’s conflicted emotions and desires perfectly and honestly. One scene where Adam speaks to his sister via webcam, confessing his homosexuality and feelings of loneliness, is delivered with tears and uncontrollable crying. Chyra convinces us that he is dealing with complete and utter despair, and you just want to give him a hug.

Since sexuality is such a large part of In the Name Of, it’s much appreciated that the director doesn’t shy away from love scenes or moments of unfiltered sexual expression. Although these scenes might evoke uncomfortableness within some viewers, the film would be incomplete without them.

Szumowska stays true to the essence of her film and accomplishes her goal of making a film that is about a love perceived as a sin. The film is not about abuse. There are no journalistic or political tones. Instead, In the Name Of is about the want for love, the need for love and the showing of love.

In the Name Of releases in New York on Wednesday, Oct. 30 at Film Forum and in Los Angeles on Friday, Nov. 15 at Sundance Sunset Cinema.

To purchase tickets to see In the Name Of at the Film Forum in NY, click here.