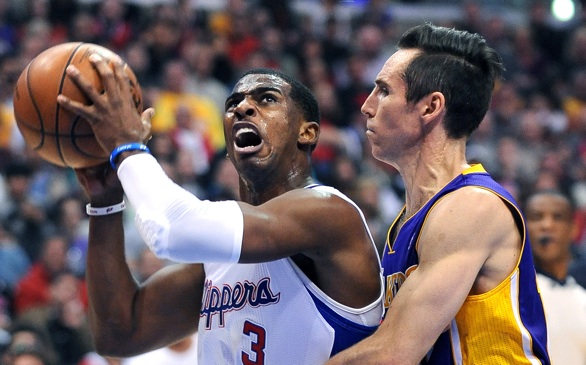 Is there a rivalry between the Clippers and Lakers?

“I don’t know. That’s for you [in the media] to decide,” Paul said. “Luckily, all I have to do is participate in the game. I remember when I first got here and everybody was saying, ‘How is it a rivalry if only one team ever wins?’ So, y’all decide if it’s a rivalry.”

Paul’s Clippers will open the regular season Tuesday night against the Lakers in their home game at Staples Center.

Since Paul was acquired by the Clippers two years ago, they are 5-2 against the Lakers. His team swept the season series, 4-0, last season.

But Paul said his former coach in New Orleans, Byron Scott, always said “rivalries are formed when you play teams in the playoffs.”

“It’s big for the city. It’s a division game for us. We’re in each other’s backyard. We need the win really bad and I’m sure they want it to.”

Paul said the Clippers don’t want to get overexcited about the game.

He knows they play Golden State in the Clippers’ home opener Thursday night at Staples Center, and that also is an important game,  considering the Warriors beat the Clippers in three of their four games last season.

“I definitely think there is a sense of urgency, but it’s a process,” Paul said. “If I said that we were ready for the playoffs right now, I’d probably be lying. We’re just excited about getting on the court and playing for something.”