Historically, Game 6 has More Meaning than Any Other for Red Sox 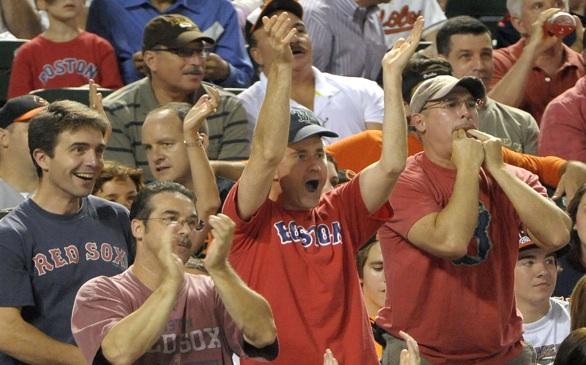 For Red Sox fans, those two simple words are usually followed by one of two names — Carlton Fisk and Bill Buckner. One name conjures up images of sheer elation and ultimate triumph; the other, abysmal failure and utter depression.

You can’t boil down 113 years of hardball history for Boston’s American League entry to one game in a particular playoff series. But with the Red Sox on the precipice of winning the World Series at Fenway Park for the first time in 95 years, tonight’s Game 6 could very well join — or surpass — those above-mentioned 1975 and 1986 contests among the most memorable in franchise history.

Think about it. It was exactly two months before an armistice was agreed to, ending the ‘Great War’ in victory for the Allies, that the Red Sox last celebrated a world championship on Fenway soil. On that afternoon, Sept. 11, 1918, Carl Mays fired a complete game three-hitter and his teammates scored twice in the third inning on an outfield error to defeat the Chicago Cubs, 2-1, and wrap up the title in six games.

The number of folks in attendance at Fenway that day, 15,238, might be what a premium ticket costs some fans tonight if money is no issue and they absolutely have to be at the park. (Consider that with inflation, 5 dollars in 1918 translates into about $75.50 today, that’s still an absurdly through-the-roof markup).

Many folks my age and older can recall the exact details of where they were and who they were with when Fisk’s iconic home run clanged off the foul pole in Game 6 of the ‘75 Series against The Big Red Machine from Cincinnati. The blast, coming on Reds reliever Pat Darcy’s second pitch in the bottom of the 12th inning, was a long, towering drive that the Boston catcher emphatically tried to wave it fair via body language as he leaped up the first base line. While the Red Sox ultimately lost that all-time classic series in seven games, Game 6 remains forever etched in minds and our souls (and gets extra bonus points for being a focal point of conversation between Will Hunting and Sean Maguire in ‘Good Will Hunting’).

Many more folks that are older, younger and the same age as me can undoubtedly remember the carnage of Saturday night, Oct. 25, 1986 at Shea Stadium in Flushing, N.Y. How else do you explain it, even 27 years later, than defeat was snatched from the jaws of certain Red Sox victory? A 5-3 lead in Game 6 against the arrogant New York Mets going into the bottom of the 10th inning, the first two Mets hitters are retired easily ... and then it all unraveled. No need to relieve all the gory details now, but of course it ended with Buckner (who, ironically, wore No. 6) watching helplessly as Mookie Wilson’s grounder trickled between his nearly shattered ankles, allowing the winning run to score. Two nights later, of course, the Red Sox lost Game 7.

Of course, there are other Game 6 moments in team history worth noting. Much-maligned J.D. Drew bashed a grand slam into the center field bleachers in the bottom of the first inning in Game 6 of the 2007 American League Championship Series, allowing Boston to come back from a 3-games-to-1 deficit to defeat the Cleveland Indians and ultimately win the World Series. There was Curt Schilling’s Bloody Sock Game in the 2004 ALCS at Yankee Stadium, when a sutured ankle held up for seven innings for a 4-2 win, the third of a historic four-game comeback sweep of the hated New Yorkers.

The Red Sox have even met the Cardinals twice in a World Series Game 6 previously; Reggie Smith had a pair of home runs while Rico Petrocelli and Carl Yastrzemski had one each in an 8-4 triumph in 1967, forcing a Game 7; and they lost Game 6 of the 1946 Series at Sportsmans Park in St. Louis, 4-1, when starting pitcher Mickey Harris couldn’t make it out of the third inning.

The No. 6 was the number worn by the much beloved Johnny Pesky, the long-time Swampscott resident known far and wide as Mr. Red Sox, a former shortstop, manager and coach for the ball club who was still hitting fungoes to players while in his 80’s. He passed away last August at age 93, but his memory and spirit live on as one of the team’s retired numbers on the right field facade at Fenway. And let’s not forget, it’s also been six years since the team’s last World Series championship, a 4-game sweep of the Colorado Rockies in 2007.

So late this evening, when closer Koji Uehara records the final out and leaps into the arms of his catcher as Boston celebrates its third World Series championship in a decade, watching it all unfold on the green grass of Fenway is a memory that millions of Red Sox fans the world over will never forget.

And it will sit atop the pantheon of memorable Game 6’s in team lore as the greatest of them all.