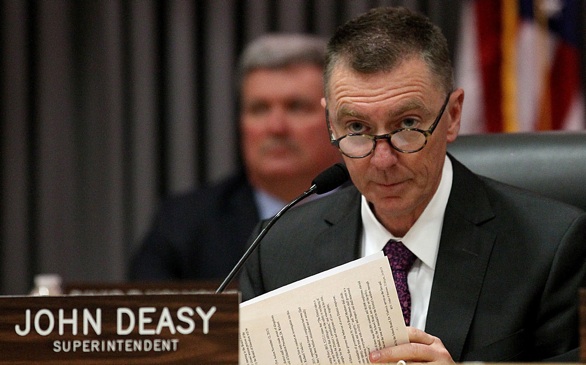 According to LA Weekly, even though teachers' unions activists might not have been too pleased with the school board's decision to keep Deasy, about 200 parents, students and community members chanted and held up signs that read "Don't Be Crazy, Keep John Deasy!"

It seems the board decided to not "be crazy" and gave Deasy a "satisfactory" evaluation during a fiver-hour, closed-door meeting. Last week, Deasy told the board that he would plan to resign in February.

Many of Deasy's supporters believe that he has made positive changes and improvements in the school district, especially when it comes to increasing graduation rates, higher test scores, fewer suspensions and more.

However, board members have challenged Deasy regarding his budget priorities, teacher evaluation system, classroom breakfast program and iPad project.

United Teachers Los Angeles President Warren Fletcher reportedly told the LA Times, "It is unbelievable that the Board of Education has given John Deasy a 'satisfactory' evaluation and rewarded him by extending his contract...It's a sad day when political maneuvering trumps the needs of students and schools."