Slipknot: Recharged and Ready to Rock 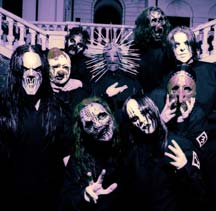 Flash back to summer camp. You’re 11 years old sitting in a cabin bunk with eight of your best friends, singing camp tunes to the melody of a slightly de-tuned guitar while the camp counselor stands in the corner, scratching his greasy beard and scribbling notes on the next day’s itinerary. Except, wait, you’re not 11 years old; you’re an adult. You’re not in a cabin; you’re in a Hollywood Hills mansion. And your camp counselor, though still scratching his greasy beard, isn’t some college dropout, he’s producer Rick Rubin. You’re in Slipknot and you’re holed up recording your third album and, while there may be singing, it sure as hell isn’t "Kumbaya."

"It was totally like camp, like a fucking fraternity," laughs Slipknot percussionist Chris Fehn (# 3) about the band’s choice to both live and work together in Rubin’s recording sprawl for the duration of the tracking process. "But it was great to have everybody living and working together because musically, when it came to ideas, we were always ‘in’ the album. I could bounce ideas off the other guys at four in the morning. We had each other’s backs and it was great seeing each other’s faces everyday and waiting to use the toilet and stuff."

Vol. 3: (The Subliminal Verses), released May 25 on Roadrunner as a followup to the platinum Iowa, showcases Slipknot’s apparent maturation as musicians and marks the band’s third full length release since first plunging into the mainstream hard rock circuit in 1999. The album is steeped in intricate riffs and smart lyrics, yet it retains the brutal strength that fans (or "maggots" as Slipknot calls them) have come to expect from the nine-man crew. One thing becomes obvious when listening to Vol. 3 — those long nights in Rubin’s mansion must have been lonely because it seems Slipknot went to bed with melody and woke up a more dynamic band. This is not your little brother’s nu-metal anymore.

"We were definitely perfectionists in the studio," Fehn explains, "but in the sense that everybody is such a good player. Our style of music is pretty intricate and heavy so it would have sounded totally stupid if we recorded sloppy. Each note really needed to be exact. The songs were written very intelligently, but not in an intellectually or mathematically trippy way. We don’t screw good songs up on purpose just to make them difficult. It’s music and lyrics that can touch a 13-year-old or a 63-year-old. It’s kind of worldly in that sense."

Slipknot’s confidence in its music has never been up for debate, however Vol. 3 is an album that almost never got made. In the wake of Iowa’s success, Slipknot went on hiatus for two years while certain members pursued side projects (singer Corey Taylor and guitarist Jim Root with Stone Sour, percussionist Shawn "Clown" Crahan with To My Surprise and drummer Joey Jordison with the Murderdolls). Fans and critics alike were uncertain of the band’s status, with rumors circulating that Slipknot was nearing its end.

"We worked so hard for so long that, mentally and physically, we were just beat to hell. We thought, ‘Do we just make another Iowa or do we call it quits?’" Fehn says. "So we decided to take a break. Some of the guys did side projects, got the music out of their souls that they needed to get out, and then we reformed and talked about what the hell was going on.

"We fought for maybe an hour. We hashed everything out and found that love for the band again, and now we are happier than ever, back together. It’s better now than when we first started. We just needed to recharge the batteries."

Recharged and ready to go, Slipknot recently wrapped up a Jagermeister tour and is gearing up for this summer’s Ozzfest, where the masked nine will rock the second stage. Until then, Fehn says of Vol. 3: "Listen to this record in your favorite spot, alone. Crank it up and just go there … because it’s going to take you there. In my heart, I know this is a record I can listen to for the rest of my life."

Vol. 3: (The Subliminal Verses) is currently available. Slipknot will play Ozzfest on July 31 at San Bernadino’s Hyundai Pavilion of Glen Helen. For more information on the band, visit slipknot1.com.