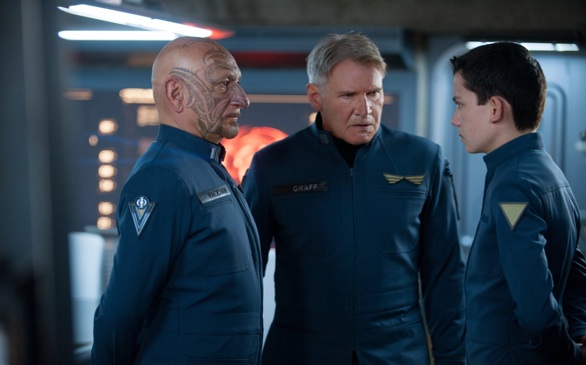 After much anticipation, Ender’s Game is arriving in theaters Friday, and it is opening to many mixed reviews. Some critics praised the sci-fi flick, but others slammed the movie hard.

Ender’s Game is an adaptation of the popular novel written by Orson Scott Card in 1985, telling the story of a young boy who is chosen because of his unparalled intellect to lead fellow soldiers in a battle that will determine Earth's future. The film’s cast includes big names such as Harrison Ford, Viola Davis, Hailee Steinfeld, Ben Kingsley, Abigail Breslin and Hugo's Asa Butterfield (as Ender).

Many of the critiques of Ender’s Game were based on the opinion that the movie did not live up to its potential. The Hollywood Reporter said the film “falls somewhat short of inspired,” and it “can’t eclipse its fantasy predecessors.” The New York Daily News gave the film a much harsher critique, calling it “one of the dullest, dumbest, most tedious movies this year…Audiences of all ages, avoid it. Brain cells are too valuable.”

Even though there are many criticisms on the film, there are just as many compliments. The San Jose Mercury News called the film a “stunning success” that “captures the spirit and intensity of what is one of the most popular sci-fi stories of all time,” and the Los Angeles Times said young people will love the film (and possibly adults too) and encouraged everyone to go see it. FoxNews.com also called it a “must-see sci-fi film for young adults.”

Despite all of the reviews, Ender’s Game is slated to do exceptionally well in theaters. The Hollywood Reporter said the film is in likely to win the North American box-office race this weekend with a $25 million or more opening.

Ender’s Game is out in theaters everywhere, so go check it out and decide for yourself if the movie is a hit or miss.