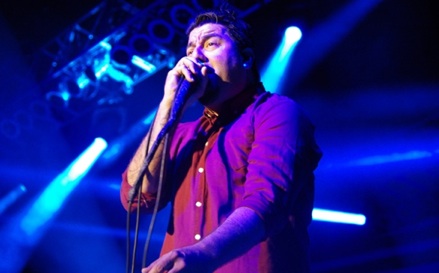 It was an unusually warm night at the Greek for alt-metal titans Deftones as they returned to Los Angeles. And if the half-mile long traffic jam getting into the venue was any indication, the band’s intensely passionate Angeleno fan base was happy to have them back.

The band couldn’t have picked a stranger and more surprising opener in Glassjaw. The post-hardcore band became notorious for its insane live shows and passionate energy in the mid-2000's and have somehow clung to relativity over the years with several EPs and a spotty yet continual touring schedule.

Lead singer Daryl Palumbo and the rest of the band were draped in dark crimson lighting, convincing at least one member of the audience that her camera was broken when all photos came out dark red. The four piece covered tracks off its admittedly limited discography with a healthy variety leaning heavily towards their 2002 tour de force Worship and Tribute, with tracks such as "Ape Dos Mil" acting as highlights.

Unfortunately, time hasn’t been well to the band. Palumbo sounded off key throughout the band’s entire 45-minute set, at times almost sounding hammered drunk as he stumbled through songs. His once legendary energy was missing and, in general, the band didn’t seem thrilled to be playing one of L.A.’s most impressive outdoor venues. In retrospect, the lack of an intimate club venue might have played a part. Regardless, it was hard not to walk away at intermission without a tinge of disappointment.

The energy was palpable as the Deftones took to the stage around 8:45. The sea of black shirts, a substantial amount donning Deftones (and Glassjaw) logos and prints, got precisely what they waited for as the band fired instantly into its set with an insane energy that further polarized Glassjaw’s lack there of.  The band’s similarly aged discography seemed fresh as ever, with lead singer Chino Moreno running all over the stage with an unending supply of enthusiasm.

Variety was key for the band’s amazing show. With live versions of “Be Quiet and Drive” and “My Own Summer” from the band’s first 1997 LP meshing with several from latest album Koi No Yokan and everything in between, the Deftones' remarkable appeal became obvious.

Throughout every minute of the band’s hour-plus set, the crowd was there every step of the way. Deftones fans are a passionate breed, fueling the band’s cult popularity over the years. But it’s been the band’s live shows that have really fueled the fire.

Moreno’s uncanny ability to switch from screams to soothing vocals fuses with the band’s mix of melody and metal, creating an unique sound that is unlike anything else out there.

With a near sing-along version of “Change (In the House of Flies)” bookending its set, it was hard to walk away without feeling some faith in the bizarre, often misunderstood genre that the Deftones helped cement. Whether it’s metal, hardcore, electronic or whatever, Deftones can wear many hats, often simultaneously. The band's latest show at the Greek did much to stoke the fire of love for the band that will remain many fans' favorite for some time to come.