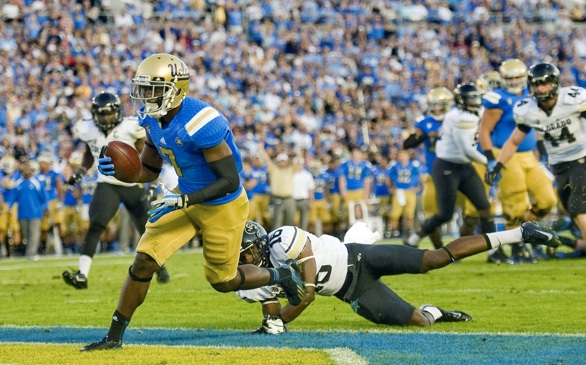 UCLA's road back to the Pac-12 championship game is clogged.

The Bruins finish the regular season against Arizona, Washington, Arizona State and USC.

For those thinking optimistically, that makes things simple.

"If we take care of business, focus on winning the game we're playing, we've got a shot to get back to the championship game," UCLA Coach Jim Mora said.

Of course, Arizona State has close to the same path. The Sun Devils sit atop the Pac-12 South Division with UCLA, Arizona and USC a game behind.

"You're focused, that's for sure," Mora said. "You can't just aim at one team. You've got to think about everybody that's in the race. That makes it fun."

So who has the best chance of getting to the title game for a shot at the Rose Bowl? Here's a look at the contenders.

Arizona (6-2 overall, 3-2 in Pac-12 play): The Wildcats, who struggled to beat California on Saturday, need help. The teams that are left on their schedule are a combined 24-9 this season. Arizona's best path is to win out and hope someone beats USC, but No. 2 Oregon looms on the schedule.

Fun fact: Arizona joined the Pac-10 in 1978 and has never been to a Rose Bowl game. Texas has played in it twice in the last decade.

Fun fact: The only thing that kept the Sun Devils out of the Pac-12 title game the last two seasons were losses to UCLA by a total of three points.

UCLA (6-2, 3-2): The Bruins win four and they get to the title game for the third consecutive season. UCLA's remaining opponents are 23-9, but real estate has to be considered. The Bruins have not won in Tucson since 2003. They have not won in the Coliseum since 1997.

Fun fact: UCLA is 11-1 against USC in years the Bruins reached the Rose Bowl, losing only in 1985.

USC (6-3, 3-2): A couple weeks ago, email to the Trojans was sent to usc@scrapheap.com. Now they have been recycled. The remaining opponents are 17-16. That embarrassing loss to Arizona State means the Sun Devils must lose at least twice. Also, USC still has to play Stanford.

Fun fact: The last time USC lost to Arizona State and UCLA in the same season was 1997.

Damien Thigpen, who suffered a knee injury against USC last November, looked more like his old self. He had 38 yards rushing in four carries, one a 27-yard run. He scored on a five-yard run in the third quarter.

"It felt good to be back in the end zone," Thigpen said. "It was special because it has been a long road."

No harm, no foul

UCLA had 122 yards in penalties. Mora, though, said he was less concerned than other weeks.

"We didn't have any pre-snap penalties," Mora said. "For the most part, they were aggressive penalties. I'm not going to fault Myles Jack for roughing the kicker."

Besides, Mora said, "I saw a couple a little different than the officials. I'm still trying to figure out how we're going to call roughing the passer."

UCLA was called for roughing the passer three times. One was charged to Ellis McCarthy. A television replay showed McCarthy wasn't near the quarterback on the play.

Cornerback Fabien Moreau and safety Anthony Jefferson hobbled off the field in the fourth quarter. Running back Jordon James spent the final few minutes of the game icing his right ankle.

Mora said, "I've been told by our medical staff not to worry about anyone."