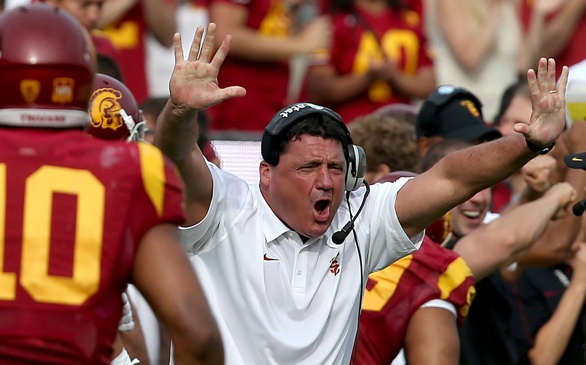 After guiding USC to an upset victory at Oregon State, Ed Orgeron is 1-0 as the Trojans' interim coach in games played in November.

On Sunday night, Orgeron said he learned from working under former Trojans coach Pete Carroll how important it was "to get better in the month of November."

During his nine seasons from 2001 to 2009, Carroll's USC teams were 29-1 in November. The only blemish: Stanford's 55-21 rout of the Trojans at the Coliseum in Carroll's final season.

Former USC coach Lane Kiffin was 7-5 in November games with the Trojans, including a 4-0 mark in 2011.

Orgeron, who succeeded the fired Kiffin in late September, has a unique opportunity to win five games this month if USC defeats California, No. 6 Stanford, Colorado and No. 16 UCLA.

But Orgeron is not looking that far ahead.

"Our goal this week is to get better," he said during a teleconference with reporters.

USC, 6-3 overall and 3-2 in the Pac-12 Conference, travels Saturday to Memorial Stadium in Berkeley to play a California team that dropped to 1-8 and 0-6 in the Pac-12 after a loss to Arizona on Saturday.

The Trojans, he said, are playing with confidence, but "we have to take that next step."

Orgeron game-plans with assistants during the week, but he said he would continue to leave in-game personnel decisions to position coaches and play-calling to coordinators.

Instead, he has focused on "being a players' coach, being a motivational coach" on the sideline during games.

Praise for the line

Orgeron echoed tailback Javorius Allen, who after rushing for 133 yards and three touchdowns Saturday said, "I just want to give thanks to my O-linemen," along with the coaching staff for believing in him.

Orgeron said Sunday that it was the offensive line's best performance since he took over the staff.

"The play of Aundrey Walker was exceptional, along with all the offensive linemen," Orgeron said

"The game plan was built on us not getting beat one on one," he said.

Orgeron praised running backs coach Tommie Robinson for his personnel decisions and the way he has utilized and believed in Allen. ... Orgeron described the Trojans' 10-play, 75-yard scoring drive in the second quarter against Oregon State as "a turning point on our new five-game season." Oregon State had come back from a 14-0 deficit to tie the score on an interception return for a touchdown. Tailback Silas Redd then carried the ball seven times, quarterback Cody Kessler completed two passes and Allen scored the second of his three touchdowns to put the Trojans ahead. "We rose to the occasion," Redd said.