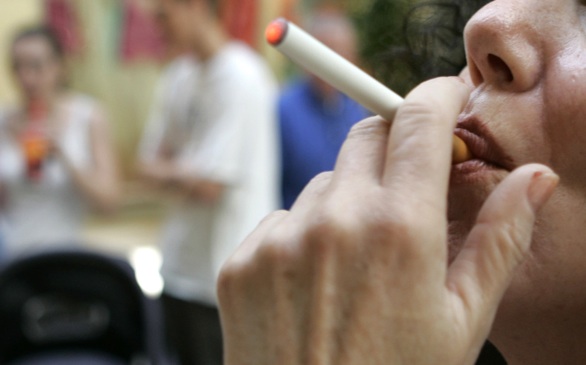 About 10 percent of UC employees smoke cigarettes, and 8 percent of students smoke, according to a fact sheet compiled by the university. The information kit does not say how many use the new electronic cigarettes on UC campuses or in the state, but a lobbying group for the retailers who sell the devices says about 4 million people across the country use them.

"We don't know what the long term health affects are," said Josh Moskowitz, director of the Center for Family and Community Health in the School of Public Health at UC Berkeley and a member of the UC committee that wrote the smoking ban. "It's not even clear what ingredients are going into these products, and it's not clear if there is consistent high quality manufacturing from some of these products. Usually, the ingredients are not publicly available. Rather than adopting a potentially risky product, it's safer to ban these products on the campuses as a precautionary approach."

The devices use small batteries to heat a flavored liquid until it produces a vapor. The liquid may contain varying levels of nicotine, from zero (flavor only) up to 24 milligrams, but no tobacco smoke is produced. Some brands resemble real cigarettes, glowing on the tip when inhaled. Others look like small mechanical cylinders; users joke they're "Star Wars" light sabers.

He said there are only five ingredients in most e-cigarettes, including nicotine, while there are 6,000 chemicals in traditional cigarettes, making them more harmful.

"Once people understand the product, the technology and how less harmful it is, they will embrace it," Kiklas said. "But we're not there yet. I understand when institutions like UC need to place the product in a category at this time. E-cigarettes have evolved to be a reliable product, and people are using it to transition away from tobacco cigarettes."

Moskowitz said the fact that e-cigarettes are allowed to be sold, when nobody knows for sure what the health effects are, points to a bigger problem.

"We allow companies to unleash these products on the public that are potentially dangerous, and the onus is not on them to prove the products are safe," Moskowitz said. "The onus is on the medical establishment to prove they are harmful. It's clearly messed up. Getting the word out on some of these health risks is extremely difficult."

Moskowitz said the ban on all smokes across the system will be helpful for older campus employees because it will make it easier for them to quit. Smokers know they can't smoke at work, and they won't be around other people who are smoking.

And for college students, who are at risk for taking up smoking, the ban will remove the incentive to start smoking for social reasons like fitting in and looking cool, he said.

"It will be particularly helpful for international students, who are coming from countries where they don't have these counter-norms against smoking that we already have here," Moskowitz said.

The UC system, in addition to banning smoking, is highlighting smoking cessation counseling covered in its health plans, faculty and staff wellness programs, and at campus health centers.

Campus News
Proposition 16: Why some Asian Americans are on the front lines of the campaign against affirmative
95 views

Campus News
Why no break on tuition despite the move to remote classes? COVID-19 costs are astronomical
318 views
bid=||