Many Latinos in College but Not Enough Graduate, Report Finds 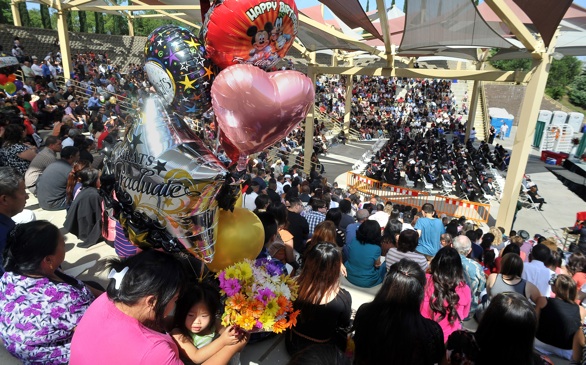 Despite increasing numbers of Latinos attending college, the rate at which they are attaining college degrees in California is still “unacceptably low,” a new report by an advocacy group argues.

Seven out of 10 Latino high school graduates in the country last year enrolled in college, a rate that surpassed their white counterparts. Yet Latinos, which make up close to 40 percent of the state’s population, have the lowest rate of college attainment in California compared with all other ethnic groups.

“We are on track to produce a generation of young people less educated than our older population,” the report entitled “The State of Latinos in Higher Education in California” issued Monday by The Campaign for College Opportunity stated. “The principal reason is that one of the largest and fastest growing segments of our population — native-born and immigrant Latinos — has unacceptably low rates of college completion.”

The report also highlights the role that community colleges can play to help address the issue for Latino students, said Michele Siqueiros, executive director of the Los Angeles Office of The Campaign for College Opportunity. While nearly 70 percent of enrolled Latinos attend a California community college, about 40 percent completed community college after six years, the report found.

Area business and academic leaders argued that more should be done to help Latino and other minority students succeed in college, which will strengthen the local economy and the workforce.

“You have a tremendous and growing portion of California’s youth whose parents brought them to this country with a dream for a better life, with a possibility or pathway to success,” said David Rattray, senior vice president of education and workforce development for the Los Angeles Area Chamber of Commerce. “As we learn how to give them strong pathways to education, they can power our economy in the next century.”

The report contrasts the very high educational aspirations of the state’s Latino community and the low number of Latinos who attend four-year universities, said John Rogers, an associate professor in UCLA’s Graduate School of Education and Information Studies and the director of UCLA’s Institute for Democracy, Education, and Access (IDEA).

“That gap speaks to the need to improve conditions across the education pipeline, elementary schools, middle schools, high schools and into college education so those very high aspirations can be met,” Rogers said.

Historically, California has not provided the same quality of educational resources to schools serving large proportions of Latinos as other schools in the state. Research conducted by the IDEA center, he said, has found that Latino students in the state are more likely to attend schools that are overcrowded, lack credentialed teachers and lack college preparation coursework.

In addition, students who are English language learners and who come from lower-income families need more, not less resources to attain the same educational goals, he said. A new state law enacted this year will change how public schools will be financed, including providing additional funds for school districts that serve large numbers of English learners and low-income students, he said.

Among the recommendations made by the Campaign for College Opportunity is creating a statewide plan for higher education to advance Latino college achievement and offering incentives to institutions to encourage higher completion rates.

“Given the large Latino demographics in our state, how do we make sure that a higher number go to college, are prepared once they get there and actually complete it?,” Siqueiros said.

Siqueiros lauded a program at Long Beach City College called Promise Pathways, which was launched last year in which participating students are placed into English and math courses based on their high school achievement rather than relying primarily on standardized assessment tests. They are also required to enroll full time and to complete key foundational courses starting in their first semester.

While the program is available to all students, rates of achievement increased for every demographic group with some of the largest gains made by Latino and African-American students, according to college officials.

“This whole issue of ensuring that students of color complete college in greater and greater numbers is a key economic issue for the state of California,” said the college’s President Eloy Ortiz Oakley. “I’m hopeful that all of us in higher education and state government rally around this issue and do what’s necessary to ensure that this next generation of incoming students in higher education succeeds in much greater numbers.”