Lance Gets Lanced — a Little Late — in The Armstrong Lie 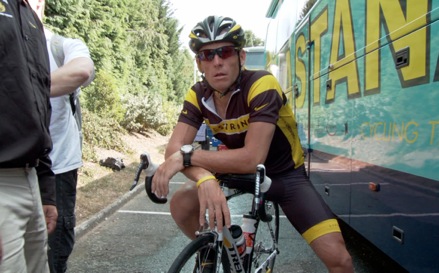 It would be too easy to dismiss Alex Gibney’s The Armstrong Lie as a two-hour-and-three-minute exercise in moral relativism and rationalization, too late to the party about a cheating athlete we’ve already made up our minds about — again.

But the Oscar-winning Gibney (Taxi to the Dark Side) had access to Lance Armstrong before he was caught cheating, and after. His cameras captured the seeds of Armstrong’s undoing. And while he allows plenty of screen time to condemn the corrupt, arrogant, bullying Tour de France champ, he is just as interested in bringing back the context, the “everybody was doing it” argument that Armstrong has fallen back on himself. It may be the truest thing the compulsive liar Lance has ever said.

Built on the ruins of an abandoned 2009 documentary that was to celebrate Lance’s comeback in that year’s Tour de France, Gibney goes back to Armstrong just as he was forced to ’fess up to Oprah in 2012, figuring a guy “who lied to my face … owed it to me.”

What Gibney brought to life is here a tale of “power,” of a hyper-competitive control freak who, even now, is wrestling for control of his story, his myth.

The myth? An arrogant, underachieving young cyclist from Plano, Texas, gets testicular cancer in the ‘90s, comes close to death, is cured and roars back to win seven Tour de France titles, beginning in 1999. His yellow leader’s jersey for that event becomes an iconic color as legions of cancer patients and those who love them rally to his Livestrong Foundation.

Glory, endorsements, celebrity and a cause — Armstrong had it all. The constant whispers about cheating, blood doping, that his success was “too good to be true” — all dismissed as Armstrong passed drug tests and sued, threatened and bullied former teammates and journalists who dared accuse him.

Gibney admits he “got caught up” in Lance-mania, too, working on the film where he followed an older Lance “racing clean” on that “comeback” Tour de France. But Gibney had his suspicions, and as that tour ended and the accusations piled up, he gave up that film only to come back to the subject years later, to give Armstrong a chance to come clean and maybe own up to what a jerk he was.

“He just can’t stand to lose,” one former supporter says of him. And what do competitors like Armstrong crave above all else? An edge.

Gibney, with footage from 2009 and fresh interviews with Armstrong’s victims, shows the intimidation Armstrong used to keep his myth intact and keep those rumors at bay. Most despicably, Armstrong was never shy about playing the cancer card, suggesting that there was an “ends justify the means” logic to his chicanery and self-righteous pose.

Gibney, knowing what to look for in that old footage, plays a wonderful game of catch-up here. He is never less than blunt about the scope of the cover-up and the corruption of the sport and those who monitored it. This is a real inside-cycling “how they did it” expose, with teammates like George Hincapie laying out the MO for the program of injections, blood transfusions and private jet flights (to hide their activities from the world) that propped up Armstrong’s U.S. Postal Service team.

Armstrong’s candor, at long last, is refreshing, though grudgingly given. He doesn’t come off as a good guy here, even if the data is there to show that yes, “everybody” pretty much WAS doing it. He was just better at it.

But the absence of fresh interviews with two of Armstrong’s fiercest critics — teammate Floyd Landis is seen in archival interviews with other journalists, and the only legitimate American Tour de France winner, Greg LeMond, is nowhere to be found —  makes you wonder if, even now, Armstrong is controlling his story.

And at this point, with lawsuits going after his ill-gotten millions, lost endorsements, stripped of his titles and with even his most die-hard fans disillusioned, the question that shouts from the cheap seats as The Armstrong Lie reaches its closing credits is: “Is there anything new here?”

The Armstrong Lie releases in select theatres on Friday, Nov. 8, 2013.

To purchase tickets to see it at the Laemmle Royal in Los Angeles, click here.

To purchase tickets to see it at the Landmark (Sunshine Cinema) in NYC, click here.

To purchase tickets to see it at the AMC Empire 25 in NYC, click here.