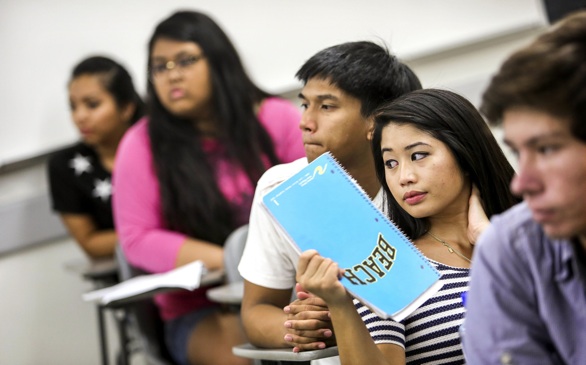 A committee of the Cal State Board of Trustees on Tuesday approved a $4.6-billion budget plan that includes money to hire faculty and increase student enrollment.

The board's finance committee approved the plan during a meeting in Long Beach. The full board will vote on the budget Wednesday.

The request is somewhat of a gamble, relying on an improving state economy and faith that, after years of cuts, lawmakers again are willing to invest in higher education.

And it comes in the face of a consistent drumbeat from Gov. Jerry Brown that California's public colleges and universities have to run leaner and acknowledge competing monetary demands on the state — such as funding healthcare, prisons and pensions.

The governor reiterated those concerns Tuesday: "Each item has to fit with each other in terms of available money down the road," Brown said.

He left the meeting before the budget vote.

Part of his multi-year funding plan for the Cal State and University of California systems includes a $142.2-million state increase for 2014-15. That plan assumes neither system will raise tuition.

Cal State officials said there were no plans to do so, but that an increase could not be ruled out, depending on the level of state support. The trustees pressed the importance of asking for funds that reflect the true needs of the 23-campus system.

"We realize it's an extra $100 million … and it's going to be a tough road, but if we don't ask we're not going to get it," trustee Douglas Faigin said.

Perhaps to emphasize the point, he sponsored an amendment to the budget that thanks the governor and Legislature for their increased support — adding that "the future of California and its economy rests on the success of the California State University in providing life-changing benefits to hundreds of thousands of students."