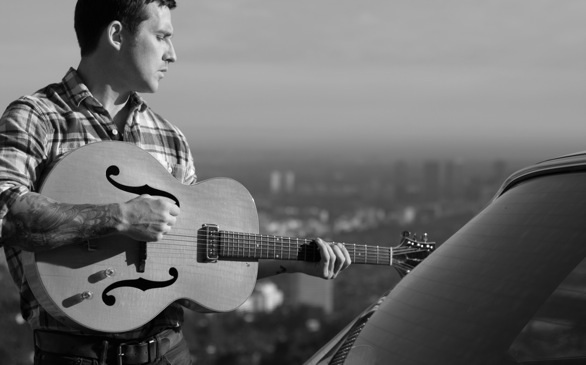 He’s had his music featured on diverse shows such as “Burn Notice,” “Hart of Dixie” and even the “Jersey Shore,” but Broken Anchor (whose real name is Austin Hartley-Leonard) hasn’t let this success get to his head. After taking the time to talk about his ups and downs and what he’s learned, Broken Anchor proves that there’s nothing broken about his musical talent.

Campus Circle: How would you describe your music?
Broken Anchor: What I do is Christian death metal…that’s a lie (laughs). I do indie rock. It’s sort of like indie rock that came from Southern California. It has kind of a beachy type of vibe.

CC: Are you just a singer, or do you also write songs, produce music, play an instrument?
BA: Broken anchor began as a studio project. I had sort of let go of my material from a previous career and started over again two years ago. Once I had material, I began performing live with a big six-person band, and then it just became me and the drummer as a duo on the road. That was great until the drummer quit.  Now it’s a one-man band. I play cello, keyboard and guitar. I also write all of my songs. I record music with Brad Gordon, a brilliant music producer.

CC: How did you get your start in the music industry?
BA: I’ve been playing my whole life, and then I started writing songs when I was 18 or 19. I never wanted to do anything else. I went to school in Nashville then moved to Austin, Texas, and now I’m in L.A.

CC: Who are you currently working with?
BA: The sound is all Brad [Gordon]. We got this tiny little studio in Echo Park. The sound Brad’s able to get from this little room is so unique. His approach to making records is different from anything I’ve ever done. When I started working with Brad, I had one song and zero confidence. The playful aspect worked…no deadlines, no impressing people, etc. The sound happened, and I was so psyched.

CC: Are you signed to a label?
BA: I’m not signed to a label, and there are so many good ones. I don’t have a dream label, because I feel it just depends on what the game plan is. Any label that says we’re willing to work as hard as you do, that’s all I want to hear. I have no problem working hard and being on the road. I would like a label to come along and say that I would be a priority. But you have to be careful about it these days…

CC: Are there any obstacles that you’ve had to overcome?
BA: I don’t have an inspirational story…I didn’t wake up under a bridge with no pants. I felt that I had a B- minus catalog and decided to start over.

CC: Who are the artists that you admire?
BA: I’m all over the place. I really love Wilco and Rza from Wu-Tang. Right now I listen to a lot of Hawaiian music.

CC: Who would you like to collaborate with in the future?
BA: My dream collaboration would be Baauer (he did the “Harlem Shake”).

CC: Where do you see yourself 10 years from now?
BA: At the rate that I’m talking, probably still on the phone with you (laughs). Ten years from now…if you say I’m still in L.A., producing music, going on tour, I would totally believe you. But if you said I would own an orange grove outside of Guatemala, I wouldn’t say “no.” If I could be happy, wake up every day, support my family and not worry about making drinks to live…I can’t think of anything better.

CC: Any advice for college students who wish to pursue a career in music?
BA: Saying you’re moving to L.A. to give music a shot for a year…very unrealistic. Wake up every day, and make music because you love it. Be in the process, not the results.

CC: Any funny stories you can share?
BA: Before a gig, I got these pants that I thought were cool. I thought I could take them on tour all the time. I’m playing a show in Silver Lake, and I’m playing this heavy part of the song. I tend do this thing where I squat down during big breaks in the song…I think you can see where this is going... I rip the back of the pants from my waste to the knee. I don’t wear boxer briefs. I’m commando 24/7...and my pants are hanging down. Hopefully, the first and last time that happens. If not, such is life.