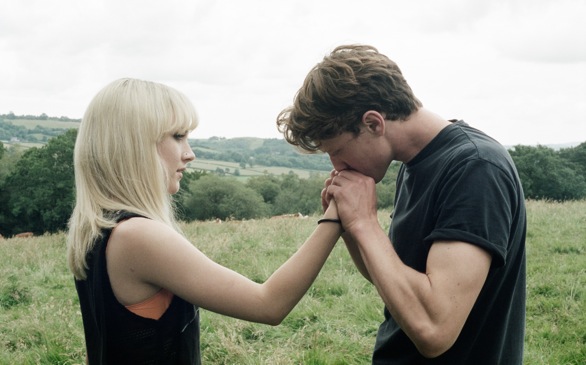 Have you ever wondered what would happen if you threw a teenage love story in the midst of World War III? How I Live Now takes viewers on a unique adaptation of the age-old story of two unconventionally separated lovers who fight against the odds to be reunited.

Director Kevin Macdonald (The Last King of Scotland, Marley) adapts Meg Rosoff’s popular novel that follows the life of Daisy (Saoirse Ronan, The Host), who is shipped off to the U.K. to stay with her relatives and finds herself in the middle of a war. She is not only fighting to survive but also to be reunited with her love, Edmond (“Eddie” played by George MacKay). This film entices viewers visually and keeps emotions high as Daisy and her young cousin, Piper (Harley Bird), navigate the countryside, attempting to get home safely during the war.

The Host star diverges from her typical, action-packed roles and takes on the complexity that is a teenager. Ronan plays not just an angry teen but also a character one does not initially like, thanks to her hostile demeanor towards her amicable cousins. We follow Daisy’s transformation from a sullen teen into a more open and empathetic character. Her demeanor is reflective of the current scenario.

“The tricky thing was to find the balance between somebody who needs to come across as quite unlikeable and quite abrasive but still have an element of vulnerability to them that makes them someone who you ultimately care about,” said Ronan. “And hopefully people do…I think it was about finding that balance and how at the start, that harshness, that coldness that she had was so much in your face and its needs to kind of slowly be pulled back.”

Although revolving around the disaster-movie genre, the film does not start on such a negative note. In fact, we watch the bohemian lifestyle of her cousins Isaac (Tom Holland), Piper and Eddie begin to crack Daisy’s hard exterior. We watch as Macdonald breaks the carefree atmosphere that had been building and interrupts it by creating a hauntingly beautiful introduction of war. One moment they are sharing a picnic, the next there is a distant “boom!” followed shortly with what appears to be snow. But with further observation, it is understood to be ash, shifting the genre from romance to a disaster film.

One of the best things about the film is the blatant ambiguity. Instead of providing the viewers with all the necessary information, only small snippets are revealed, which keeps the imagination reeling and the suspense high. Not only are viewers forced to remain attentive, attempting to grasp onto all the limited amounts of information in order to makes sense of the issue, but it also keeps the plot revolving around Daisy and Eddie.

Ronan explained, “It’s more frightening and eerie…when you don’t know where the threat is coming from.”

“Once you put a name to something and you tell people ‘this is what it is and this is whose doing it’, they become less frightened,” added Macdonald. “The imagination works on the little bit of information that you have been given to create horrible scenarios in your head.”

Thanks to Macdonald’s documentary background, he creates an eerily authentic atmosphere. There is no obvious deviation from reality. Instead, through the utilization of real landscapes, the audience is made to feel uneasy with the possibility of this fantasy becoming a reality. The beauty of the sweeping hills and the dense forests are correlated with scenes of war’s aftermath, creating a stark reality. The visuals actually add to the fear factor due to the relatable scenery and the idea that this could easily happen in the near future.

“The one thing that really did strike me was that the scenery was very familiar to me,” said Ronan. “To see a place that apparently is so safe, be completely obliterated and destroyed and emptied of its people is what’s really terrifying about it because it could very easily happen at any point.”

Macdonald understands that dialogue is not always necessary to get a point across. A more visually driven film not only allows viewers to be encapsulated by the beauty of the scenery, but it also alludes to a documentary-style film. The real locations, combined with the ambiguous war, create more than just an atmosphere; it’s an environment with depth and meaning.

Daisy’s actions may be considered naive, as she risks not just her safety but also Piper’s just so she can be return to Eddie. However, her longing to be reunited with the one thing she cares about is admirable. She is a strong, determined character who has finally obtained a makeshift family and will risk it all to salvage it.

Since it is a young cast, there is a sense of innocence and naivety to the narrative. A carefree atmosphere that was established prior to the war is carried over. Instead of evacuating, they decided to hide. They appear to lack curiosity about the war, choosing to ignore it until it affects their lives. Keeping the war in the back of their minds reestablishes why the war is left ambiguous.

Macdonald explained, “It’s not right to tell the audience more than [what] the characters know and to leave you with questions and let your imagination run riot...that’s a deliberate strategy.”