50 Things to Know About College Basketball 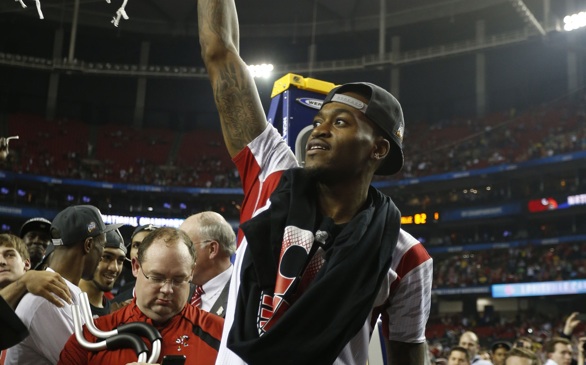 There is inspiration in Louisville, giddiness at Michigan State and loneliness in Miami.

Keep your hands to yourself while playing defense and your eyes on a budding rivalry between the best two teams and players in the Big 12. Here are 50 things you need to know about the upcoming college hoops season:

1. Louisville junior guard Kevin Ware, who became the Joe Theismann of college basketball when he sustained a gruesome compound fracture of his right leg during the NCAA Tournament last year, is back playing. When he first started the healing process he would land on one foot while taking jumpers, obviously a self-preservation instinct because of the injury.

2. The Cardinals, picked to win the American Athletic Conference, are anchored by guards Russ Smith and Chris Jones, last year’s national junior college player of the year and the proud owner of an Allen Iverson poster in his dorm room.

3. Jones said he’d love to meet Iverson one day. Maybe he can ask Kuran Iverson, a 6-10 freshman for Memphis who is a second cousin to A.I., to help him out. Louisville hosts the Tigers on Jan. 9 and goes to Memphis on March 1.

4. After dominating Conference USA for 18 years, Memphis is picked second in the American. “This is going on my fifth year as head coach,” said Memphis’ Josh Pastner, “and this is my first time we weren’t picked to win the league.”

5. Anybody else bored with conference realignment?

6. There will be an emphasis by referees on hand-checking, which likely will increase the number of personal fouls and lengthen games. “We may have some games where you can’t go up and down twice without having stoppage,” said Kansas coach Bill Self. “It’s going to be a fragmented game in large part.”

7. There also will be expanded use of replay for shot-clock violations and possession questions — also meaning longer games.

8. Connecticut is once again eligible for the NCAA Tournament after being barred last season because of poor academic performance. The upperclassmen are leading the way by making sure everyone is focused on classwork. “I think the message is, we ain’t ever going to be back on that banned list,” junior guard Ryan Boatright said, much to the dismay of his English professor.

9. Here’s a grand slam Texas Tech forward Jaye Crockett could have done without: Tubby Smith will be his fourth coach in four years. He was recruited by Pat Knight, who was replaced by Billy Gillespie after one train-wrecked season. Then Chris Walker wore an interim tag last year, and now it’s Tubby. “I haven’t been more excited playing for a coach since high school,” Crockett said.

10. “I haven’t felt this good about the potential and possibilities of a team I’ve had since the 2001 team (led by Jason Richardson) that took us to a third straight Final Four,” said Michigan State coach Tom Izzo. The decisions by stars Gary Harris and Adreian Payne to put the NBA on hold are a large reason for Izzo’s optimism.

11. Harris’ mom, Joy, was Purdue’s first All-America women’s player. When she played for Detroit’s WNBA franchise, Gary would get to run through the Palace of Auburn Hills. Talk about the take-your-child-to-work-day program paying dividends.

12. The Big East preseason player of the year is Creighton senior Doug McDermott. Creighton? That sound you just heard was conference founder Dave Gavitt spinning in his grave.

13. McDermott is bidding to become the first three-time first-team All-America since Wayman Tisdale and Patrick Ewing in 1985. The Bluejays move from the Ohio Valley to the Big East, even if it’s not nearly the powerful league it once was, factored into McDermott’s decision to return to Creighton.

14. Marquette was picked by the coaches to win the 10-team Big East, followed by Georgetown, Creighton and Villanova. The league tabbed former WNBA commissioner Val Ackerman to be its leader. “I will do everything Dave Gavitt set out to do when he led this conference as it started in 1979,” she said. “We are going to make the Big East a force in college basketball.”

15. Kentucky is the Associated Press’ preseason No. 1 for just the third time ever. In 1980-81, the Wildcats lost to UAB in the second-round of the NCAA Tournament. In 1995-96, the kittens won the national title.

17. The Wildcats added six McDonald’s All-Americans after missing the NCAAs last year, which caused Florida senior center Patric Young to observe “I hope they think they can just walk on the court and they’re going to beat everybody. I hope that’s what they think.” The Gators visit their bitter rivals on Feb. 15 and host Kentucky on March 8.

18. “The college basketball landscape has changed,” Syracuse coach Jim Boeheim said. “Any team that’s in the top 20 can go to the Final Four. Any team in the top 30 probably. We’re one of those teams (ranked eighth). The ACC’s wide open.”

20. Georgetown is not on Syracuse’s schedule, but Villanova is (Dec. 28, at the Carrier Dome).

21. Drexel opens its season Friday night (midnight EST) at UCLA in a game televised on the Pac-12 Network. It’ll be the third trip for a Philly school to Pauley Pavilion since 1987, when Temple beat the Bruins on its way to a No. 1 ranking later that season. Villanova lost at UCLA in 2001. Ditto for Temple in 2005.

22. In the Philadelphia area, the Pac-12 is on Comcast channel 716 and Dish Network’s channel 413. It is not available on Verizon FiOS.

23. La Salle High/Penn alum Fran McCaffery has a decent chance to lead Iowa to its first NCAA Tournament since 2006. It would be the fourth school McCaffery has coached into the Big Dance. Lehigh, UNC-Greensboro and Siena were his first three.

24. Iowa, which lost to Baylor in last year’s NIT championship, returns its top five scorers and nine of its top 10.

25. Miami lost its top six scorers from last year’s first-ever ACC championship squad. “I’m used to being the young guy,” said senior guard Rion Brown. “Now I’m the old man. We had basically a seven-man rotation last year and six of them left. They kind of left me here all by myself.”

26. Most UCLA fans probably had never heard of Andy Enfield before he led Florida Gulf Coast to the Sweet 16 last year and took the USC job. They certainly know him now after he snapped at his players during an October practice, “We play up-tempo basketball here. If you want to play slow, go to UCLA.”

28. New Mexico, the school Alford left like a jilted bride, promoted Craig Neal to head coach. During a team summer trip to Australia, his freshman son Cullen suffered a ruptured appendix and spent 11 days in a Sydney hospital.

29. Savon Goodman left the UNLV team following felony charges for an alleged burglary in August. Goodman is due back in Vegas next week for a preliminary hearing, which has put his basketball career in limbo.

31. St. John’s has been to the NCAAs just once in the last 11 years, but a solid group of returnees and the addition of freshman Rysheed Jordan (Robert Vaux High) has hopes running high. After leaping over a 6-8 teammate during an intrasquad dunk contest, the New York Post dubbed him “Flair Jordan.” The Johnnies play Villanova at the Wells Fargo Center on Saturday, Feb. 22.

32. LaQuinton Ross is expected to fill the void at Ohio State left by Deshaun Thomas’ departure to the NBA. Ross, a junior from Life Center Academy in Burlington, N.J., was at his best during last year’s NCAA Tournament. Aaron Craft, known as much for his stifling defense as for his unpopularity among opposing fans, also is returning for the Buckeyes.

34. Officials are expecting the Final Four crowds at Jerry Jones’ house in suburban Dallas to exceed 80K, which would break the mark set during the 2011 national semifinals (UConn/Kentucky, Butler/VCU) of 75,421 in Houston. The championship game mark of 74,326 was set last year in Atlanta when Louisville beat Michigan.

35. The only other time the Dallas area hosted the Final Four was 1986, when freshman Pervis Ellison led Louisville to an upset over Duke, which was making its first of 11 Final Four appearances under Krzyzewski.

36. For the next two years, TBS will broadcast the national semifinal games, which is problematic for the dozens of college basketball fans around the country who do not have cable television. CBS will have the championship game in 2014 and 2015, but TBS gets the entire Final Four in 2016.

38. Butler turned to assistant Brandon Miller when Brad Stevens surprisingly left to take the Celtics job. Miller was a point guard at Butler and led the way when the Bulldogs surprised Wake Forest in 2001 for the program’s first NCAA Tournament win in nearly 40 years.

39. Robert Morris has never won an NCAA Tournament game, but beating Kentucky in last year’s NIT first round has given the Colonials a recruiting boost. Coach (and Penn product) Andrew Toole said prospects have told him, “ ‘I know you beat Kentucky.’ That’s the response we get from kids who normally wouldn’t be in the know when it comes to Robert Morris basketball.”

40. Incoming freshmen Jeremiah Worthem and Britton Lee, both from MCS Charter in Northeast Philly, signed with Robert Morris long before the Kentucky win. RMU plays at Kentucky on Nov. 17.

41. Rough time to be a Grambling fan. Not only is the football team 1-9, but the basketball team is coming off an 0-28 disaster and returning two scholarship players and one walk-on. Hate to pile on, but the Tigers also are ineligible for postseason play because of poor academic performance.

42. One of Eddie Jordan’s priorities at Rutgers has been creating a less fearful culture among his players following the April dismissal of Mike Rice after abusive videos surfaced. Jordan went just 27-55 for the Sixers in his last head coaching job.

43. Rutgers hasn’t been to the NCAA Tournament since 1991 and things will not get any easier when the Scarlet Knights move into the Big 10 (along with Louisville) next season.

46. Gonzaga’s strength is its backcourt of Kevin Pangos and Gary Bell Jr. Pangos, a nominee for nation’s best point guard, hails from Newmarket, Ontario, a Canadian town of about 80,000 that has produced comedians Jim Carrey and John Candy, the Flyers’ Steve Downie and Phillies utility infielder Pete Orr.

47. Georgetown plays Oregon on Friday at Camp Humphreys army base in South Korea, a breezy 7,000 miles from the Hoyas campus. The base is named for Benjamin K. Humphreys, a chief warrant officer who died in a helicopter accident in 1961.

48. An interesting rivalry to watch is Oklahoma State/Kansas in general, and Marcus Smart/Andrew Wiggins in particular. Smart is the Big 12’s reigning player of the year and Wiggins, a freshman, is widely regarded as a leading contender to be the No. 1 pick in next year’s NBA draft.

49. “A lot of people are saying he’s the best player now in college basketball,” said Smart, a sophomore. “All I’m saying is how can you be the best player in something you haven’t even played yet?” A wrist injury suffered during the NCAA Tournament was part of the reason Smart decided not to go to the NBA.

50. Kansas is in line to play Villanova the Friday after Thanksgiving (Nov. 29) down in the Bahamas. Besides Wiggins, fellow freshman Joel Embiid also is drawing interest from NBA scouts. KU coach Bill Self called the Cameroon native “a young Hakeem Olajuwon.”

THE PICK
Love Michigan State’s maturity, leadership and talent. The rugged schedule will serve Sparty well in March, as it usually does. The call is Duke, Wisconsin and Oklahoma State join Tom Izzo in suburban Dallas, but Michigan State walks away with the nets around their necks.
———
©2013 Philadelphia Daily News
Visit the Philadelphia Daily News at www.philly.com
Distributed by MCT Information Services

Special Feature
What would sports look like with smaller or no crowds?
237 views

Special Feature
He made most of his gap years: Capehart, 85, gets degree from USC after starting in 1952
220 views

Special Feature
The Pac-12 at a crossroads: morality or money?
1,090 views

Special Feature
Taking in a LAFC game is good for the sporting soul and stomach.
1,524 views