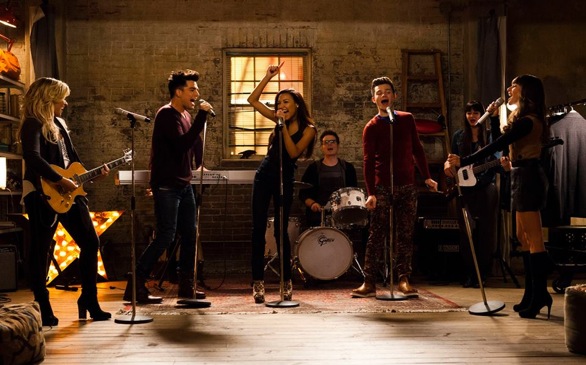 The last episode of "Glee" had us fans crying, as we remembered the life of Finn Hudson (played by the late Cory Monteith). Mercedes (Amber Riley) returned and sang "I'll Stand By You," and the tears started flowing. Santana (Naya Rivera) sang "If I Die Young" and freaked out in the middle of it, and we cried even harder. And, of course, Rachel (Lea Michele) dedicated and sang the beautiful, yet somber "Make You Feel My Love," and we completely lost it.

Now, we're here - a month later - and "Glee" has finally returned with a new episode that promises to leave our tear ducts alone. At least, we hope so.

Lambert said this to the Hollywood Reporter about his role on the hit comedy/drama show: "I had such a blast filming the show, and loved getting back into acting and working with such great people...I'm so excited for everyone to see it!”

In Thursday's episode, appropriately titled "A Katy or a Gaga," Lambert is expected to perform "Marry the Night" by Lady Gaga and "Roar" by Katy Perry (also including the New Directions, Rachel, Kurt, Santana and Dani).

Lambert's fans have not been shy about displaying their excitement for his upcoming debut on the show. One fan reportedly tweeted, "Adam Lambert is on glee tonight.. I guess you could say that my day has gotten better."

Demi Lovato is also making a return on the show as Dani, Santana's supposed love interest and Rachel's friend.