The Doctor Who Experience: Catch the Next Tardis to Cardiff, Wales 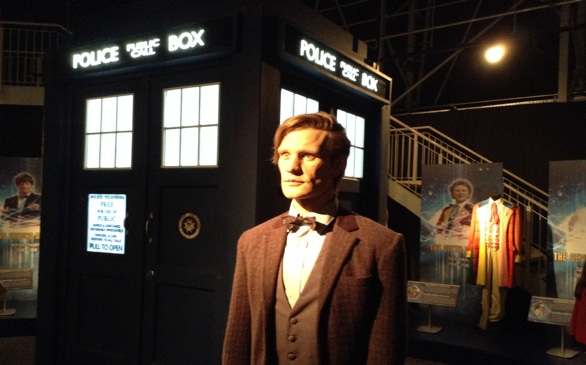 This is a must-visit for all 'Doctor Who' fans!
(Credit: Kevin Wierzbicki)

Fans of the long-running British sci-fi TV series "Doctor Who" have good reason to get excited; the show’s 50th anniversary will be marked by a Nov. 23 airing on BBC America of a special called "Day of the Doctor."

The show will feature the current (eleventh) Doctor, Matt Smith, as well as some of the stars from the program’s past, including David Tennant who played the tenth incarnation of the Time Lord. The special will also be simulcast in select theaters on the 23rd.

However, for the ultimate "Doctor Who" fun , ans will want to visit The Doctor Who Experience in Cardiff, Wales in the U.K. If it’s not convenient for you to take the TARDIS there, a simple jet aircraft will do!

"Doctor Who" is filmed at the BBC studios in Cardiff so it was only natural that when “The Beeb” decided to open an interactive museum for fans, it should be located in the Welsh capital. The large facility is situated in the city’s trendy and scenic Cardiff Bay area, and Cardiff’s excellent public transportation system has buses and trains that run to the area on a regular basis.

The experience begins with a short film narrated by Smith. Astute viewers will notice that the screen on which the film is projected on appears to have a hairline crack in it. The fracture is meant to be there; at the end of the movie, the screen is revealed to be a doorway that opens up into a room full of the Doctor’s goodies.

Smith again appears, this time on video monitors throughout the mostly dark room, speaking to visitors as lights flash and sound effects emanate from behind a giant telescope and haphazardly piled stacks of odd-looking Time Lord junk. One of the most amazing features in this room is a female face with eyes closed (just the face!) that is at first glance apparently just some sort of mask. Eventually, the face opens its eyes, moves its mouth and speaks, looking for all the world like a real woman. When she’s done talking, another hidden door slides open, and the Doctor frantically rushes everyone into the TARDIS!

Inside, where all the gizmos are actual props used on the show’s set, fans can grab the controls and, with the Doctor coaching on the video monitors, maneuver the TARDIS through space and time to a destination unknown. The TARDIS floor moves up and down and gadgetry spins, reels and even “smokes” a little as the Doctor looks on, all the while clutching his Sonic Screwdriver and hoping for the best. When the TARDIS thuds to a standstill, an exit door opens and (oh no!) experience-goers have landed amongst a bunch of hostile Daleks! Shouting “exterminate the humans!” and “resistance is futile!” the Daleks move menacingly towards the captive bunch, while overhead (this is projected; you’ll experience it in 3D) Dalek spacecraft fire laser blasts at you. Of course, the good Doctor ultimately comes to the rescue, but not until after the Daleks give you a good scare.

After the guided portion of the tour ends, fans can take all the time they want to explore two floors packed full of "Doctor Who" memorabilia. You’ll see the trademark costumes the various Doctors wore and the costuming used by dozens of the Doctor’s foes. For the most part, these are all actual show-used pieces, not recreations the BBC has been storing in a warehouse.

Some things are newly made, such as the wax figure of Smith standing outside a model of the TARDIS. However, fans who’ve followed the show for a while will marvel at authentic pieces from throughout the show’s history: displays featuring Cybermen and Sontarans, scary monsters such as the Abzorbaloff, Winder and Scarecrow, and all the various models of Daleks.

A tribute to Sarah Jane Smith and other sidekicks is here as is another TARDIS set: a Police Public Call Box (how the TARDIS appears from the outside) set up for photo opportunities. In general, if there i something you remember from the show, chances are it is here. Right in the middle of the lovely Welsh city of Cardiff.