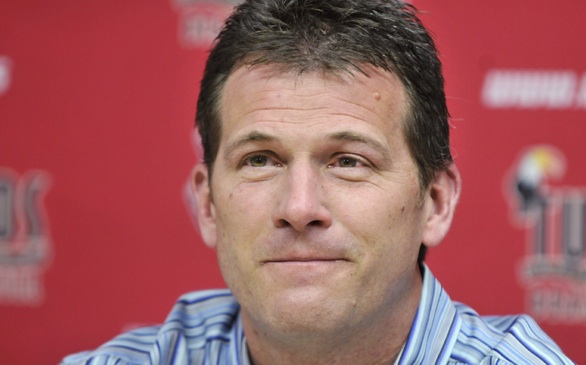 UCLA’s 13th head basketball coach officially opens his program this Friday with a 9 p.m. home tipoff against Drexel. Here are a five questions to keep in mind as the Bruins enter the Steve Alford era.

At an introductory press conference in April, athletic director Dan Guerrero described Alford as a coach who “can bring a brand of exciting basketball” to UCLA. Reading between the lines: someone who won’t adhere to Ben Howland’s slow-down, half-court offense.

Can Alford do that? Early reviews from the players indicate that he’s letting them play more freely compared to a year ago, but his recent history doesn’t support the idea of full-throttle, run-and-gun offense. According to advanced stats guru Ken Pomeroy, here’s how New Mexico ranked nationally in adjusted tempo — a possessions measure — under Alford: 222nd, 152nd, 213rd, 122nd, 172nd and 206th.

Asked about those numbers last month, Alford deferred to the Lobos’ scoring average. Through his six years in Albuquerque, the team only once averaged less than 70.0 points per game, and never fell below the Mountain West’s top three.

“No one who’s ever seen us play would say we’re slow,” he said.

It’s worth noting that a team can be efficient, high-scoring and entertaining without pushing the ball at breakneck pace every possession. Nevertheless, playing slow has somehow become an epithet in the basketball world: USC coach Andy Enfield’s joked during one practice last month that anyone who wanted to do so could head to UCLA, a quip that quickly turned into a national story.

Q: How athletic are the Bruins?

If the Bruins really do want to run, they’ll need the personnel. With junior guard Norman Powell and freshman Zach LaVine, UCLA has at least two that love to play above the rim.

In terms of athleticism, LaVine has already drawn some comparisons to former star Russell Westbrook, even if he’ll likely run with the second unit. Odds are he’ll become a fan favorite by the end of the month, and makes at least one or two SportsCenter highlights by the end of the season.

Powell was a four-star recruit in 2011, and could break out after averaging 6.1 points last season — mostly off the bench. The San Diego native considered transferring out until Howland was fired.

Q: What kind of player will Kyle Anderson be?

Anderson is arguably the most intriguing player in college basketball. At 6-foot-9, 230 pounds, he is likely UCLA’s best passer as well as rebounder.

But with Larry Drew II setting a single-season program records in assists last year, Anderson wasn’t needed to handle the ball often. He turned into more of a point forward, but one that wasn’t quick and couldn’t stretch the floor well due to his struggles from the 3-point line (8 of 38, 21.1 percent). He averaged 9.7, 8.6 rebounds and 3.5 assists — his potential always seemingly untapped.

Entrusted with starting point guard duties this year, “Slow Mo” could seize the mantle as the team’s best player. In UCLA’s exhibition win over Cal State San Marcos, he showed off his versatility with 22 points, 12 rebounds and 10 assists — hitting both his attempts from downtown. It was subpar competition, but encouraging nonetheless.

Anderson’s father has already said that this will most likely be his son’s last season of college basketball, but if he leaves, he’ll be entering one of the deepest draft classes in years. Current projections don’t have him going earlier than the bottom of the first round.

Q: How much better will the Bruins be on defense and on the glass?

Howland struggled to get UCLA to play effective man defense last year, reluctantly (and briefly) resorting to zone after an early-season upset to Cal Poly. The team also finished with the conference’s worst rebounding margin.

The new coach has noticed some of the same problems. Though Alford has praised the team’s offensive development, he said defensive communication and rebounding are still lagging behind.

“It’s a work in progress,” Powell said. “I feel like we’re getting better. I think that’s one of the main things that we need to focus on right now.”

Alford also said this week that the Bruins will need rebounding from the backcourt as well, something Howland stressed a few times last season. If sophomore Tony Parker can emerge after shedding over 20 pounds, those worries could subside a little. He had 17 points and 16 rebounds in an exhibition win over San Marcos.

The Indiana native has evoked John Wooden often in his media appearances, but that has done little thus far to smoothen his transition into Westwood.

His handling of Pierre Pierce’s rape case at Iowa in 2002 continues to haunt him. Most damning was his failure to immediately apologize for defending Pierce when asked about the incident in April. Last week, the Orange County Register published e-mails from outraged faculty and alumni, including one who won championships under Wooden.

Winning will win him over some fans, but others have already sworn him off. Road crowds will surely remind him of the incident too, whether on signs or in taunts.