Typhoon Haiyan: The Deaths, Damage & How You Can Help 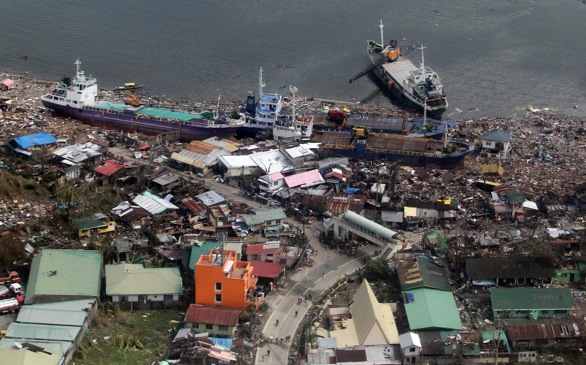 Typhoon Haiyan is said to be one of the deadliest storms to ever hit the Philippines. It swept through six Philippine islands on Friday, and it is estimated that more than 10,000 people died in the city of Tacloban alone. There are still many more displaced everywhere.

Scientists are seeing that there is a link between the disaster and climate change. It is believed that when the Earth warms up, the tropical storm intensity will also increase. Yeb Sano, head of the Philippine’s government delegation to the United Nations (UN), emphasized all of the countries need to take action to reach a climate deal now (instead of waiting until 2015) that will help finance the poorer countries.

The storm has had devastating effects. Typhoon Haiyan flattened buildings, brought huge ships into the cities and destroyed nearly everything in its path. The winds were the strongest ever to be recorded in the Philippines, hitting 190 miles per hour. Because of this, the roads and airports are greatly damaged, slowing down aid members who are trying to provide help and relief. The roads were already not in great shape before the storm (due to the lack of government funding and corruption) and now with these damages, it only makes accessing to other areas more difficult for relief members.

Many survivors lost nearly everything, and many people are starved. There is reportedly hardly any water in some areas, as well as no electricity and food. In addition, medical supplies are running out. With supplies running out, there have been reports of people breaking in and scavenging for foods and supplies.

Some are upset at the government, especially Philippines president, Benigno Aquino III. The response to the disaster is arguably slow, and Aquino said many first responders were affected by the storm and did not show up to work.

To help with relief for this country, there are several organizations that are accepting donations and more. Both the Philippine Red Cross and American Red Cross are implementing tracking systems to help find lost family members. Doctors Without Borders is sending out staff members to help with medical needs, and the World Food Programme is sending out 40 metric tons of biscuits and emergency relief supplies.