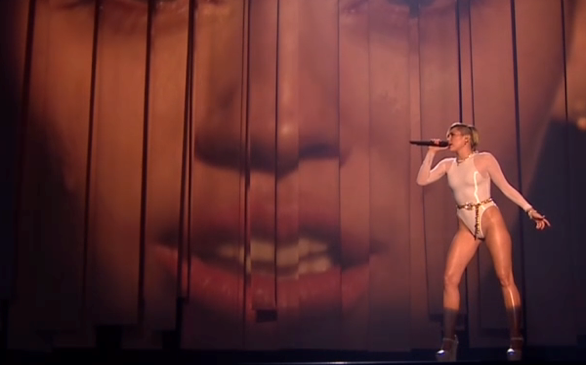 The 2013 European Music Awards were celebrated in Amsterdam on Sunday, Nov. 10. Celebrities such as Miley Cyrus and Katy Perry not only performed but also accepted awards.

To open the show, Cyrus descended to the stage on a throne to begin her outer space-themed performance of “We Can’t Stop.” Her performance consisted of “twerking and attitude.”

Later in the night, Cyrus performed “Wrecking Ball,” and then something predictably unexpected happened. After winning Best Video of the Year for “Wrecking Ball,” Cyrus lit a joint on stage, which was censored and removed from the awards show in the United States. Cyrus was reportedly smoking backstage throughout the night.

Katy Perry’s performance also stood out at the awards show. She won Best Female Performer (which is her fourth EMA Award) and performed one of her new songs, “Unconditionally.” In her performance, Perry was “…suspended in the air, looking like a maypole wrapped in ribbon. As her dancers below her unraveled the ribbons, Perry's next costume was revealed—a bedazzled bodysuit,” according to E!.

Robin Thicke performed “Feels Good” and “Blurred Lines,” surrounded by women in skimpy outfits. Rapper and model Iggy Azalea performed “Blurred Lines” with him instead of Cyrus (there was no foam finger included this time).

Justin Beiber won Best Male Artist for the fourth year in a row, and he sent a video saying “thank you” to his fans. The audience cheered so loudly during Bieber’s thank-you speech that it was hard to hear what he said.

The Killers and Kings of Leon also performed some hits, and Icona Pop ended the show with “I Love It.”

Keep an eye out for Austin Mahone, who won the award for Best Push. This rising star said, “I’m so excited and so honored to have won these amazing awards. I can’t thank my Mahomies enough. This is all because of them,” according to a prepared statement.

Other award recipients included Beyoncé, One Direction and Green Day.

Classy and edgy were common themes on the red carpet. Perry arrived wearing not only a simple, light green, satin dress. However, she was also donning what appeared to be an engagement ring on her left ring finger, according to Perez Hilton, who speculates a marriage in the future.

Cyrus made a statement on the red carpet in edgy attire. She wore knee-high, peep-toed, black and white striped boots with a Tupac and Notorius B.I.G. backless, haltered mini-dress.

For more information on the MTV EMA 2013, click here.