Back Ailment Will Sideline Steve Nash at Least Two Weeks 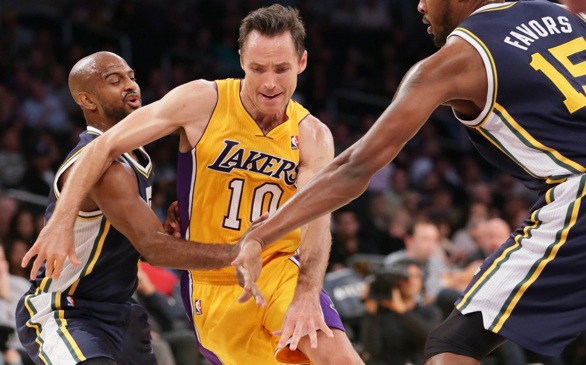 Anxiousness awaits as the Lakers wonder how long Steve Nash’s ailing back will keep him sidelined.

The Lakers expect their 39-year-old point guard to stay sidelined for least two weeks after a meeting Monday with back specialist Dr. Robert Watkins revealed Nash is having persistent nerve pain in his back. He will receive an epidural block sometime today in hopes of alleviating the back pain that caused Nash to miss the second half of the Lakers’ loss Sunday to Minnesota

Nash also received three epidural blocks last season when he missed eight games, including two postseason appearances, because of persistent back and hamstring issues. But Nash has said the treatment produced minimal results.

The Lakers’ initial timeline means Nash will miss at least six games, including those against the New Orleans Pelicans (tonight), Denver Nuggets (Wednesday), Memphis Grizzlies (Friday), Detroit Pistons (Sunday), Golden State Warriors (Nov. 22) and Sacramento Kings (Nov. 24). The Lakers will re-evaluate Nash in about 10 days, which would likely provide clarity on whether he can return during the team’s week-long trip with stops in Washington (Nov. 26), Brooklyn (Nov. 27) and Detroit (Nov. 29).

Well before his doctor’s visit, Nash didn’t need an official diagnosis before reporting a grim evaluation.

“It’s slowly getting worse and worse,” Nash said Monday after practice at the Lakers’ facility in El Segundo.

D’Antoni said Jodie Meeks will start at shooting guard while Steve Blake slides over to point guard. Meeks has averaged a team-leading 12.8 points on 50.7 percent shooting from the field and 45.9 percent from three-point range. Blake has averaged 10 points on 38.9 percent shooting and a 48.8 percent clip from beyond perimeter. Blake also made a game-winning three-pointer last week in the Lakers’ win over Houston.

“He’s a guy that can create plays for others,” Lakers center Pau Gasol said of Nash. “We don’t have much of that. We need guys who can sacrifice themselves to create a shot for the next guy to make it easier for the rest of the guys so we don’t have to force too much ourselves.”

Unfortunately for the Lakers, they’ve become accustomed to this routine.

A year after missing a combined 32 games last season because of a fractured left leg and persisting back and hamstring issues, Nash has experienced more ailments. His back and hamstring problems have emerged, and he’s also nursing a sore left ankle, a stiff neck and pain in his quads.

It doesn’t help that Nash has only averaged 6.7 points on 26.1 percent shooting in 22.5 minutes while also missing two games on the second night of back-to-back contests in the hopes of staying healthy.

“I don’t know if it makes it any more difficult because it’s tough for anybody. But you get close to all your players,” said D’Antoni, who coached Nash in Phoenix. “He’s a special player, and you hate to see him struggle.”

The NBA’s No. 4 all-time leader in assists seems a sure lock for the Naismith Memorial Basketball Hall of Fame. He once ran D’Antoni’s offense well enough in Phoenix to earn two NBA league MVP awards. But Nash, in his 18th season, no longer has assured an offense runs smoothly.

“That’s one of the reasons I’ve come out a few times this year,” Nash said. “I’m not able to get it done and produce. It’s not worth being out there.”

Nash spent the offseason in rehab hoping to prevent such a scenario. The returns on his investment, though, haven’t paid off.

“I’m just staying positive and hungry,” Nash said. “It’s hard every day to keep fighting uphill. I also have to weigh it against the fact that I still really love playing and I want to be a part of this group. That makes it worthwhile, but there are days when it’s a big challenge.”