Push is on to Close College Gap for California's Latinos 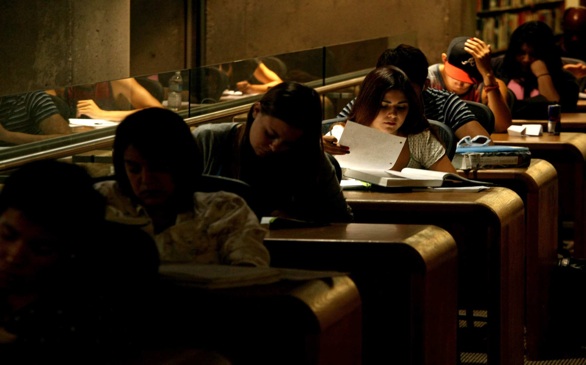 As a freshman at Cal State San Marcos, Cipriano Vargas' grades were so low, his part-time job waiting tables so consuming and his home life with eight siblings so chaotic that he was on the verge of dropping out.

The first-generation college student and son of parents with an elementary school education struggled to maintain a 1.9 grade point average.

"I didn't have the skill or ability to manage time," said Vargas, 21. "My parents didn't understand the complexity of going to college, that it wasn't just two hours of classes and then I'm back home. And living with my brothers and sisters, it became very distracting to do homework."

His experience mirrors that of millions of other Latino students who are attending colleges and universities in record numbers but who face vast obstacles on the road to graduation.

While Latinos make up 38% of California's population, they trail all other ethnic groups in completing college, according to a report released recently by the Campaign for College Opportunity, a California advocacy group.

About 11% of Latinos age 25 or older have earned bachelor's degrees, compared with 30% of all Californians, 39% of whites in the state, 23% of African Americans and 48% of Asian Americans and Pacific Islanders, the report said. The study used census reports, state and federal education data and statistics from California's three systems of higher education — the University of California, California State University and the community colleges.

Educational achievement among Latinos shows some promise: Between 1990 and 2011, the number of those ages 25 to 34 who earned high school diplomas increased 23%. But the number earning bachelor's degrees increased only 5%.

In the fall of 2012, 69% of Latino freshmen in the state started at community colleges, 14% at Cal State campuses, 5% at UC campuses and 8% at for-profit colleges, the report said.

And more high-performing Latino students end up in community colleges compared with their peers: In 2010, 46% of Latinos who graduated from high schools with the highest test scores enrolled in two-year schools, compared with 27% of white students, 23% of African American students and 19% of Asian students.

The numbers are important because students who enroll in four-year schools are more likely to graduate. Only about 40% of Latinos complete community college after six years.

"The challenge is how to better prepare students, how do we make sure high schools provide better opportunities?" said Michele Siqueiros, executive director of the Campaign for College Opportunity. "But there is also a responsibility on the part of the colleges and universities. They're doing a good job of receiving students but not a good job on the achievement end."

Latino students face a number of socioeconomic challenges, said Roberto Suro, director of the Tomás Rivera Public Policy Institute at USC. Many are from first generation, low-income families who face pressure to contribute to the family income. They also are less likely to move away from home to attend college. Research suggests such a move tends to benefit some students.

"What is tragic is that you invest 12 years into people to get to the point to where they can enroll in college, and we know that the difference in completing a bachelor's is enormous in terms of life outcomes — and at that point, at the end of the race, in the last two years of a person's education, we just stop caring and we fail them," Suro said. "To me, that's a policy issue."

There is an increasing focus on how to improve outcomes. Community colleges recently launched a score card system so that students and others can obtain graduation rates and other information from all 112 campuses, broken down by ethnicity and other factors. Cal State also has a graduation initiative designed to narrow achievement gaps.

A collaboration in Long Beach also is showing promise in improving enrollment and graduation rates. It helps prepare K-12 students with a more rigorous college-prep curriculum and offers a free semester of tuition at Long Beach City College and guaranteed admission to Cal State Long Beach.

Educators in East Los Angeles want to replicate that model and are set to launch a pilot program next fall centered on Garfield High School, its feeder elementary and middle schools, East Los Angeles College and Cal State Los Angeles.

Many details are still be to worked out. But the goal is to create a "college-going culture" in the region, said East Los Angeles College President Marvin Martinez. Enrollment at the Monterey Park campus is 77% Latino. Many enter with a sixth-grade education level in math and an eighth-grade reading level.

"For students who come to us at those levels, it may take three to five years to graduate from East L.A. because they have to take so many remedial levels to transfer," Martinez said. "The research clearly indicates the longer it takes to transfer, the higher the probability that they aren't going to."

In Vargas' case, campus clubs helped pull him through rough times. His parents are immigrants from Mexico and his father worked for more than 10 years in the strawberry fields in Fallbrook. Vargas participated in the College Assistance Migrant Program, a federal project that provides services such as counseling, tutoring and financial assistance to students in their first year of college. He became a mentor for other students in the program.

A sociology major, he eventually got a job in student government, which stoked a growing interest in education policy.

Last year, Gov. Jerry Brown named Vargas to one of two student positions on the Cal State Board of Trustees. Vargas earned a 3.8 GPA last semester, he said. One of his goals is to devote more resources to student support services for the kinds of mentors and advisors who were key to his progress.

"I think it's especially important to have faculty who have gone through similar experiences and are representative of the community," Vargas said. "I know how powerful and impactful it can be having a mentor. If others hadn't been there for me, I probably would have dropped out by now."