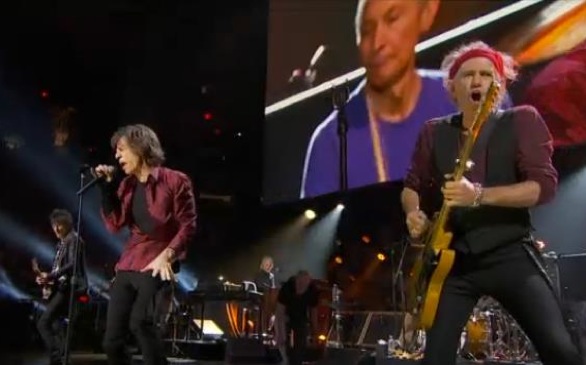 After disaster strikes and the water recedes and the tides pull away, who do you turn to for help? Neighbors, friends and family do the best they can, but you know, no one rakes in that charitable dough quite like our good ole pals, the celebrities.

Documentarian Amir Bar-Lev wanted to showcase the hasty and hectic three-month production of one of the grandest happenings to be put on at the Madison Square Garden. From the beginning, he knew he wanted the finished product to be lighthearted, as opposed to his normal habits of making politically charged docs, including The Tillman Story (2011) and Fighter (2000). For that reason, it becomes extremely important to understand that 12-12-12 is above all else a concert documentary; it’s about the music and the happiness that the concert brought rather than the tragedy that Sandy brought.

Some of the most fantastic pairings make you wonder why they never happened decades ago, most notably the duets between Eddie Vedder and Roger Waters on “Comfortably Numb,” and Chris Martin and Michael Stipe on “Losing My Religion.” Instant goosebumps.

Besides the music, however, Bar-Lev doesn’t have that much to say in regards to how Sandy affected the people of New York. We hear about “the indelible spirit of New York”—probably the most labored phrase from the event—but mostly from the mouths of celebrities.

Of course, there are clips of the disaster and strangers helping strangers, but the focus here in 12-12-12 is definitely on the event and its production. Some audiences will undoubtedly be relieved to see less crying montages of the unfortunate families that have lost their homes. Instead, they’ll welcome scenes of the celebrity telethon, which included the entire cast of “The Sopranos” answering phones, or maybe even the broadcasting director looking like Rain Man as he tries to keep up with all the camera angles while the music plays. By the end, we forget the victims’ moving stories because, frankly, we’re busy humming “Livin’ On a Prayer.”

In terms of relief concerts, 12-12-12 becomes almost indistinguishable from others, most notably 2002’s Concert for New York City, a concert event honoring the victims of 9/11 that was also held at Madison Square Garden with almost the exact same line-up produced by the exact same three bigwigs. Equally, if not more amazing, was the 25th Rock N’ Roll Hall of Fame concert held at Madison Square Garden a mere three years prior to this event.

Since Bar-Lev wanted to keep away from a heavy-handed, emotionally wrecking doc, his angle on the concert documentary needed something more to stand out in a vast crowd of its own clones. Unfortunately, 12-12-12’s counterparts dwarf it.

If I could give the soundtrack and the doc separate grades - oh boy, I would.