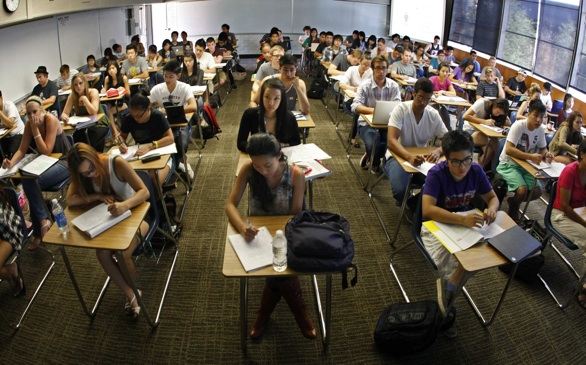 Orange Coast College in Costa Mesa may soon be shedding its commuter campus reputation as the college looks toward building student housing.

The Coast Community College District, which oversees three colleges — Orange Coast, Golden West and Coastline — is conducting a feasibility study to determine whether or not student housing is a possibility at OCC, said Trustee Lorraine Prinsky.

As of the 2011 school year, 14% of OCC students lived in Costa Mesa, 13% lived in Huntington Beach, 8% lived in Garden Grove and about 13% lived in Santa Ana. About 11% lived outside the county and the remaining were scattered throughout other Orange County cities, according to the OCC website.

"About half of OCC students live out of our district," Prinsky said. "Being aware of that, OCC is different from our other colleges because it does draw students far and wide."

While the district has been looking into creating student housing for several years, it was Measure M, a $698-million bond measure passed by voters last November, that made Coast's dream a potential reality, she said.

"Until Measure M passed, I don't think we had the funding for it," she said. "The bond takes it out of the fantasy stages and more into the possibility stages."

The district is looking into two possible locations for housing. One is next to the district offices on Adams Avenue and the other is in a parking lot at Fairview Road and Merrimac Way, said OCC spokesman Doug Bennett.

College and district officials are still discussing the potential uses for the two plots.

However, Bennett suggested that said one piece of land could cater to the non-traditional student, such as veterans and those who have children, while the other could be tailored to the more traditional student.

OCC officials are circulating a survey among students and staff to gauge what amenities they would like to see in on-campus housing. Some of the options include a bank and convenience and clothing stores, said Rich Pagel, vice president of administrative services at OCC.

"We're envisioning housing geared toward students, a place where we could build a cohort of students studying and spending time together," he said.

If the district approves the housing plans, OCC would be the first community college in Orange County to offer student housing.

"Everyone comes here, does their thing, goes to class and then leaves," he said.

On-campus housing would make it easier for students to participate in extracurricular activities, like football games and movie nights, Pagel said.

Thomas Hoang, 22, rents a room in Garden Grove and commutes to OCC, but is hoping to move to an apartment in Costa Mesa.

"If the dorms were cheap and in good condition, I would definitely think about moving on campus," he said.

District and campus officials are not sure at this point how much the proposed student housing would cost students.

OCC originally offered student housing in the 1940s and early 1950s when the campus was transformed from an army base into a college, Pagel said.

"It was the old army barracks, but I don't think they were intended to be permanent housing," he said.

The land development committee will present more information on student housing at the district's next meeting and will make a final recommendation in the spring.