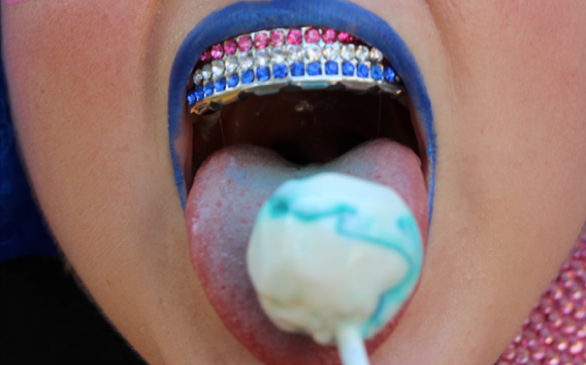 Its Blue Cheese lollipop is one of the most bizarre yet surprisingly tasty flavors.
(Credit: lollyphile.com)

If you love your lollipops as much as the little kid in the playground sucking feverishly on a Tootsie Pop, you'll probably go crazy with excitement after stumbling upon Lollyphile, a company that sells a variety of pretty pops.

But hold your horses - this company's lollipops are quite unusual, to say the least.

Lollyphile boasts an eclectic collection of non-traditional flavors; "Breast Milk," "Sriracha Bacon" and "Blue Cheese" are some of the bizarre standouts. However, if you want to stick with something safer but still out of the norm, the  "Party Girl" (it tastes like birthday cake frosting), "Strawberry Basil Mojito" and "Strawberry Banana Daiquiri" lollipops sound divine.

The bacon-flavored pops don't contain real bacon, and the "Breast Milk" is vegan and therefore does not contain real breast milk (thankfully). Also, the booze-flavored lollipops taste like liquor, but they don't contain actual alcohol...so you won't get wasted simply by sucking 10 of these (darn).

Those brave enough to lay their tongues on one of those interesting flavors can do so by placing an order on Lollyphile's website.