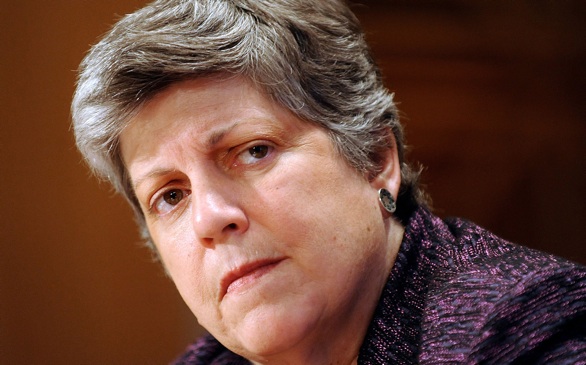 Janet Napolitano, the president of the University of California.
(Credit: Olivier Douliery/Abaca Press/MCT)

Yet Napolitano acknowledged that the plan could fall through if state lawmakers don't approve UC's expected request for an additional $120 million from Sacramento.

"We'll fight very hard so that there is no tuition increase," Napolitano said during a break. So far, she said, "I've had a good response from Sacramento."

Napolitano announced the undergraduate tuition freeze as part of a package of initiatives in which she hopes to improve the transfer rate from community colleges, turn research into viable products more quickly and, by 2025, create as much energy at UC as the 10-campus university consumes.

But the tuition plan for 2014-15 would have the most immediate impact on students.

"This is not a mere timeout, or a one-time holiday," said Napolitano, who rose during the meeting and jogged around the large circular table to deliver her news facing the regents, her back to the audience.

Napolitano said a committee will study ways to improve the tuition-setting process, such as "cohort tuition," which would create different tuition levels depending on what year students arrived on campus.

"I want tuition to be as low as possible," Napolitano said. "And I want it to be as predictable as possible."

Because tuition was also frozen this year after voters approved Proposition 30, a package of tax increases, and last year thanks to a state buyout, undergraduates next year will pay the same tuition they paid in 2011-12: $12,192 - excluding room, board and other costs that bring the price to more than $32,000.

At the same time, half of UC's 185,000 undergraduates qualify for a tuition waiver because their families earn up to $80,000, Napolitano said, and another 20 percent pay slightly more than half price because of financial aid.

News of the tuition freeze contrasts greatly with the increases announced almost every year since 2001. Since then, the annual cost of attending the public university has tripled and led to angry student protests of a kind not seen in decades.

Yet few students heard about the tuition freeze because they had already exited the meeting angrily, chanting, "Whose university? Our university!"

They had come to address the regents, and several expressed opposition to Napolitano's appointment. Napolitano joined UC on Sept. 30 after stepping down as secretary of Homeland Security. Since then, protesters have followed her around, angry that she had presided over about 2 million deportations.

"She has no legitimacy! It's an insult that this board would appoint a top cop!" yelled David Douglass, a UC Berkeley student and organizer with the civil rights coalition By Any Means Necessary whose remarks echoed those of several others.

But workers with the American Federation of State, County and Municipal Employees, which is in labor negotiations with UC, also told the regents that injuries at UC's medical centers have soared because of unsafe conditions such as understaffing. The union has set a one-day strike for Wednesday.

The regents did not comment on Napolitano's initiatives, although they reflected topics of interest to them:

-- Community college transfers: About 14,500 California students transferred to a UC campus last year, double that of 20 years ago. But the process is often frustrating because UC doesn't accept every community college class, forcing students to retake some. Ideas for improvement will be presented at the March regents meeting.

-- Zero-net-energy consumption: By 2025, UC is to consume no more energy than it creates. Napolitano's proclamation came a day after UC Berkeley announced it had met its goal, two years early, of reducing its greenhouse gas emissions to 1990 levels.

-- Inventions to products: The idea of translating research to products is often called "tech transfer," and Napolitano wants UC to do more of it faster. She asked staff for a plan by early spring.

In October, Napolitano said she planned to spend $15 million to recruit more graduate students, hire more postdoctoral students for the faculty, and help students who illegally reside in the country.

"We're really encouraged," Kareem Aref, president of the UC Student Association, told the regents. He said he hoped Napolitano would not relax after her energetic start.

"I don't intend to tread water," she assured him.