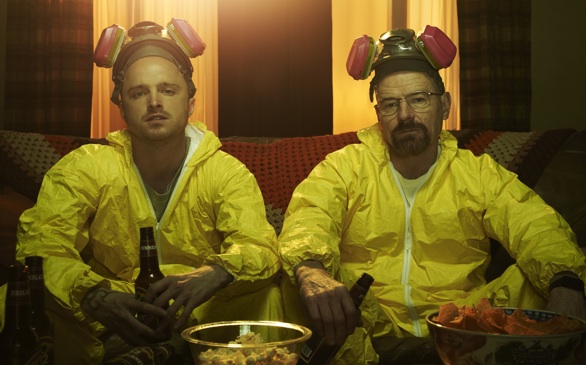 The Majors: Nowhere is the influence of Christopher Nolan's Batman films better seen than in Zach Snyder's Man of Steel, an update on the Superman saga that brings the American icon into the 21st century while simultaneously draining him of the charm that made the first Christopher Reeve films so endearing. At least with Nolan as both producer and writer on the project, it's difficult to accuse Snyder of ripping off Nolan's influential Dark Knight series, but at the same time, the film loses some of the characteristics that make Superman unique among the glut of comic book heroes. Henry Cavill is a vast improvement over Brandon Routh as Clark Kent, since he at least does not attempt an imitation of Reeve, while Amy Adams (Lois Lane) illustrates the difficulties in casting. This may be the one instance in which one could say that Adams is no Teri Hatcher, and not have it be a compliment.

Peter Jackson is a little more than 50 years old, which makes it remarkable that he seemingly has filmed 100 years worth of footage for the Lord of the Rings series. Keeping with his tradition of padding out his fantasy epics, he once again has released an extended edition for The Hobbit: An Unexpected Journey. The result is that a film that was already bloated and dull becomes excruciating. The first Lord of the Rings trilogy could get away with adding deleted footage that was still taken from the Tolkien novels, but The Hobbit itself is a slight story that required Jackson to add material so that he could extend it to three films, instead of wrapping it up in one three-hour epic. Every scene moves at a snail's pace, and the various dwarves and hobbits aren't nearly as charmingly whimsical as Jackson must believe them to be. Only Ian McKellen retains much dignity from the proceedings, but even he exists as a reminder of the strengths of Jackson's original trilogy. The rest is a reminder of the worst parts of the original: the cutesy comic relief takes center stage, without most of the characters that gave it gravitas. The Hobbit: An Unexpected Journey not only takes longer to watch than it does to read The Hobbit, but with the extended scenes it may very well take longer than it did to write The Hobbit.

Even the most tedious of Peter Jackson's work is still preferable to Twilight Forever, the release of the complete saga of the abstinence education fable posing as a vampire story, considering Jackson draws from J.R.R. Tolkien, while the Twilight films draw from Stephanie Meyer. None of the three stars put on anything resembling a good performance, with the only obvious effort shown by Taylor Lautner for his time spent at the gym. Enough invective has been justly directed at these terrible films, but they at least introduced Anna Kendrick to audiences and gave talented directors such as Bill Condon and Catherine Hardwicke enough cash to finance their next several independent projects. The love between Edward and Bella may live forever, but these films are, at long last, dead.

We're the Millers seems like it should be a moderately entertaining Showtime dramedy instead of a feature film, both because of the story of a pot dealer and a stripper pretending to be a family and because stars Jennifer Aniston and Jason Sudeikis seem to be biding time before their inexplicable film careers finally end. This continues Aniston's break from good-girl roles that began with Horrible Bosses, but like that one, it seems more like a novelty. This time instead of Rachel talking dirty, this is Rachel as a stripper. While this isn't as desperate as some of Aniston's other outings, it still doesn't give what audiences really want: Rachel being funny.

The Idiot Box: For those viewers who somehow missed the final season of “Breaking Bad” that extended in September but cannot wait to binge-watch the last episodes on Netflix within the next year, both the final season and a box set of the entire series receive DVD releases this month. While all of the accolades for the series are deserved, and the show has the most satisfying end run of episodes of any series since “Six Feet Under,” what distinguishes “Breaking Bad” from the other legendary series is just how much fun it is. The show depicts dark situations but never wallows in it. It is the rare television series that can satisfy both critics and viewers, mostly through clever plotting and a willingness to defy expectations. In the pantheon of great television antiheroes, Bryan Cranston's Walter White may be the best, since creator Vince Gilligan never excuses or justifies his behavior the way that even “The Sopranos” occasionally would do.