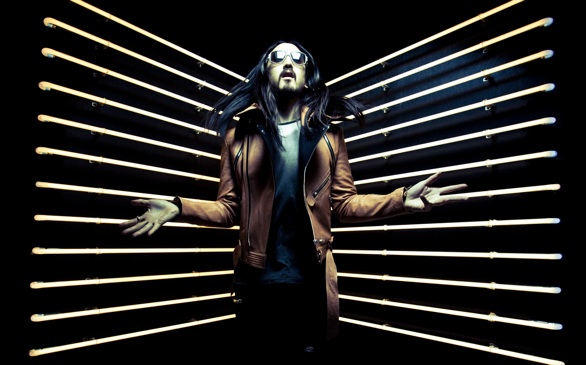 The EDM master notes you don't need to do drugs to have fun at one of his shows.
(Credit: Dove Shore)

DJ Steve Aoki is a Grammy-nominated international EDM star. He produces hits and remixes with some of the music industry’s biggest names, and he is known for his crazy antics such as “caking” audience members and crowd-surfing with inflatable rafts during his performances.

Aoki’s sophomore album, Neon Future, is set to be released in 2014, and his latest single, "Bring You To Life (Transcend)" with Rune RK and RAS is out now. The DJ is currently on his Aokify American Tour 2013, and he will be performing at the Shrine Auditorium & Expo Hall in Los Angeles on Friday, Nov. 15.

Aoki recently chatted with Campus Circle about the tour, his upcoming album and the inspiration behind his music.

Campus Circle: You just started your tour. How’s that been going?
Steve Aoki: The tour has been incredible; it’s been the best tour I’ve ever done. It’s such a diverse tour, and having Waka Flocka, Borgore, Pharrell and the whole cast of Dim Mak opening the shows, it’s just been incredible. The shows are really high energy and the crowds are getting bigger.

CC: What’s unique about this tour?
SA: Of course I’m doing my cakes and my raft, but I’m also bringing you new technology to the stage. I’m bringing in something called Neon Future Technology to the show…robots, LED and all kinds of stuff, so it’s really interesting.

CC: You perform at The Shrine on Friday. What are you most excited for?
SA: The L.A. show is going to be the most special show of the whole tour. It just sold out, so I’m really happy about that. Travis Barker, Linkin Park, Iggy Azalea, Alvin Risk, Waka Flocka and Keys N Krates are all playing. So all these special guests, and a lot of different vocalists as well, are gonna jump on stage with me and sing the songs they did with me. It’s gonna be just f**kin amazing. I’m just so happy.

CC: Can we expect any surprises?
SA: We’re going to break world records. I’m bringing Guinness Book Of World Records there, 'cause we’re gonna attempt to break a couple of world records at the show.

CC: A dollar from every ticket sale is being donated to charity. Why did you decide to do this?
SA: We’re going to raise close to or over $100,000 from this tour, and it’s all going towards brain research. I picked four reputable organizations, and we’re going to let the voters choose where the money is going to go. It’s giving agency to all the fans that come to my shows to let them choose. Every year I pick a different topic, and this year it’s all about the brain.

CC: Tell us about your upcoming album.
SA: My next album is called Neon Future, and the features I can announce so far are Mac Miller, Machine Gun Kelly, Waka Flocka Flame, Linkin Park, and will.I.am. Those are the ones where I have close finished tracks…we’re still finishing up music.

CC: How does Neon Future compare to your first album, Wonderland?
SA: Wonderland was a big album for me, and I’m still so proud of the Grammy nomination for it...but honestly, Neon Future to me is like Wonderland 5.0. It’s really on a much higher level; the music production, the songwriting, the fact that I’m working with artists that I’ve been dreaming to work with… it’s just altogether a much bigger masterpiece for me.

CC: Let’s talk about you. You’re one of the biggest names, if not the biggest name, in EDM right now. Did you ever think this would happen to you?
SA: It’s crazy…it’s been a whirlwind. It’s not like when I was growing and developing as a DJ, I was like, “I’m gonna be THIS big”. I don’t like to do that, because you just have to go with the flow of where your passion will take you.

CC: How does your passion affect your music?
SA: At the end of the day, all this stuff that we do is all about our emotions and feelings, and that’s what drives the music…that’s what drives producing these songs. When I write a song it’s always about how it’s going to make you feel.

CC: What inspires your creativity?
SA: I draw inspiration from everything. The thing is, I’m very forgetful, so I always write down anything that inspires me. I’ll take a picture of it, record it into my phone or write it down. I literally take pictures of all kinds of weird s**t. I’m very “of the moment,” so when I feel like there’s something special, I want to capture it. I want to take a video, I want to shoot it, to smell it and taste it…I want it all in that way. So I travel with a whole team; I travel with a photographer and videographer, and I make sure they capture the moment as well.

CC: What would you like to tell your fans?
SA: First of all, I want people to wild out, and I want people to f**kin lose their heads. But when you’re doing drugs and you’re too high, then you don’t even know what the f**k is going on with the music. The music, I promise you, will take you to that f**kin place. You’ll break your head through ceilings and ceilings and ceilings, and finally reach new elevated experiences if you focus on the music. And you don’t need s**t in you to get you to that place. You don’t need to “pop molly” to get there. I mean, if you’re going to do it, be responsible, but you don’t need it.

CC: What do you hope to accomplish on tour?
SA: I want to inspire. I want to bring people out of certain places and take them to another place. That’s my goal. I want my shows, my music to create a place where people can escape their f**kin s**t job or f**kin work, school, parents, whatever it might be. If I make a song that makes people feel something, then I feel like I’m successful in what I’m doing, because all I want to do is touch people and inspire people.