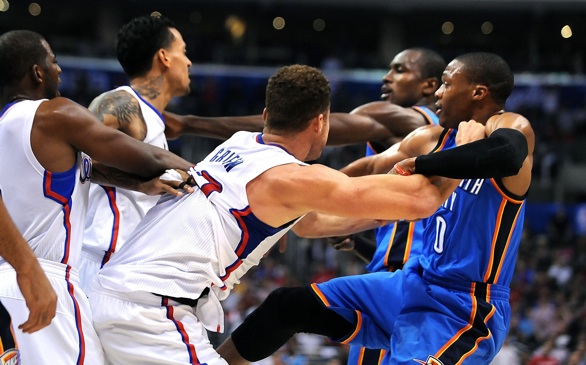 Embattled Clippers forward Matt Barnes was back on Twitter again Thursday, this time to offer an apology to his teammates, the Clippers organization and fans for his rude behavior and inappropriate remarks after being ejected from the Clippers’ victory over the Oklahoma City Thunder on Wednesday night.

Barnes got himself ejected after a pushing and shoving match with Thunder forward Serge Ibaka, who was also ejected.

Barnes had run in to help teammate Blake Griffin, who also had gotten into a shoving match with Ibaka with 6.2 seconds left in the second quarter.

While the game was still going on, @Matt_Barnes22 fired off a tweet that included a racial epithet and a profanity: "I love my teammates like family, but I'm DONE standing up for these ...! All this ... does is cost me money."

I'd like to take a second to apologize to the #LACorganization, my #Teammates & #CoachingStaff & the #ClipFans.. For my actions "cont"

Not only on the court, but off.. I was completely wrong for pushing Ibaka & then for what I tweeted following the altercation.. "Cont"

I've been doing this for to long to let my emotions get the best of me.. My poor choice of words & timing do not reflect "cont"

Who or what I am about.. It was very selfish on my part to make this situation about me instead of my teammates that fought their "cont"

Hearts out & earned a big win against a tough okc team.. Now I could have took the easy way out & said, "My twitter was hacked" "cont"

But that's not what I'm about, I except full responsibility for all my inappropriate action last night & I am truly sorry!

Barnes probably will be hearing from the NBA offices sometime Thursday regarding his in-game tweet (players are not supposed to tweet until about 30 minutes after a game is over) and for his language.

He’ll probably be fined for sure.