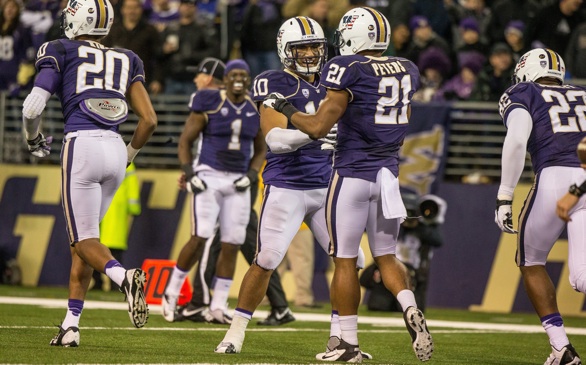 Washington hasn’t beaten the Bruins at the Rose Bowl since Nov. 11, 1995. Should quarterback Keith Price lead his Huskies past UCLA today at 6 p.m., he’ll not only reshape his team’s storyline, but also his own.

Price, a senior and third-year starter, has seen the highs and lows of being the face of the franchise. A promising talent as a sophomore, he slumped last year in a turnover-marked campaign.

Price threw at least one interception in all but two Pac-12 Conference games, getting picked multiple times in four games. His accuracy also dipped, dropping 6 percent to a 60.9 completion rate. He finished 2012 with the eighth-best quarterback rating in the conference, sandwiched between Cal’s Zach Maynard and Utah’s Travis Wilson.

Washington finished fourth in the Pac-12 North, finishing the regular season with a dispiriting overtime loss to Washington State — the Cougars’ lone league victory. In the Vegas Bowl, the Huskies then lost 28-26 to Boise State.

Price has rebounded this fall. The Compton native has been intercepted four times this season, the second-lowest total for a Pac-12 starter behind Marcus Mariota. He has the conference’s fourth-best quarterback rating, just behind UCLA’s Brett Hundley. He is already No. 2 on Washington’s list of career passing yards, 795 yards ahead of predecessor Jake Locker.

With him, Washington is looking up, however tenuously. The Huskies started the season with a 38-6 blowout of Boise State, but haven’t proved themselves capable of a better finish than last season. At 6-3 and 3-3, they are fourth in their division.

A win in Pasadena should move them up.

“I think Keith has a really unique opportunity here in this last month of the season to leave a tremendous legacy on this program,” coach Steve Sarkisian said.

“Watching a lot of film, it looks like he definitely wants to stay in the pocket and pass,” defensive end Keenan Graham said. “He doesn’t run unless he absolutely has to.”

It helps that Price has one of the best rushers in the country next to him. Bishop Sankey ranks third in the country in rushing yards (145.0 per game) and fourth in touchdowns (13). He is one of only four backs in school history to hit the 1,000-yard mark in a season. Five more scores would give him sole possession of UW’s career rushing touchdown record.

UCLA is familiar with dynamic backs. In a 31-26 win over Arizona last weekend, its defense allowed 149 rushing yards and a touchdown to All-American Ka’Deem Carey — redeeming itself with a key forced fumble at the goal-line.

Despite the numbers, Carey fell to No. 2 on the national rushing leaderboard. Sankey, who leads the nation with 17 runs of at least 20 yards, is breathing down his neck.

“They have a little bit of a different style,” said Bruins coach Jim Mora, a former Husky who said his history has little impact on this game. “This guy, he’s a glider. He’s tough to tackle. A really good football player. You’re talking about two of the very best backs in the nation.”

Football
NFC preview: How the Eagles stack up against the rest of the conference
1,035 views

Football
Littleton needs to be on the money for Rams
1,019 views

Football
Austin Proehl, hopes to join his father with a Super Bowl ring, helps out by playing role of Edelman
1,812 views