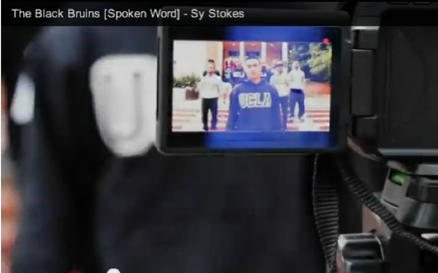 UCLA has found itself under national scrutiny after a group of African American students slammed the school’s lack of diversity in a spoken word video on YouTube.

With statistics and facts to back them up, 12 students self-named the “Black Bruins” revealed shocking facts about the lack diversity at one of California’s most elite schools.

In Fall 2012, just 660 students, or 3.3 percent of the 19,838 male students, at UCLA were black. Of the 2,418 entering male freshmen students, only 48 of them were African American. Ricardo Vázquez, assistant director of media relations for UCLA confirmed these staggering statistics.

The video points out that UCLA has more national championships than black male freshmen enrolled at the school.

“When we have more national championships than we do black male freshmen, it’s evident that our only purpose here is to improve your winning percentage...and you tell me I should be proud to be a bruin,” states the video.

The students in the YouTube video titled “The Black Bruins” [The Spoken Word] say these numbers are an “unacceptable result for an institution that calls itself one of the world's most ethnically and culturally diverse communities.”

“This school is not diverse just because you put it on a pamphlet,” declares UCLA junior Sy Stokes, the narrator and creator of the video.

Stokes is the cousin of UCLA tennis legend Arthur Ashe, and he said that he wanted to make the video because he wanted high school students applying to UCLA to know how small the black population really is before the UC application deadline on Nov. 30.

“We had to do something to put our issues on the map,” Stokes told UCLA student paper Daily Bruin.

He also said he almost left UCLA his freshman year because he felt “isolated and alone” as a black student on campus.

Stokes succeeded in creating a buzz. The “Black Bruins” video quickly went viral and started a widespread discussion about racial diversity in colleges.

UCLA administrators released an e-mail statement to the school paper in response to the video, stating they “share their dissatisfaction and frustration” with the students. UCLA Vice Chancellor for Student Affairs Janina Montero said the administration is doing everything they can “within current laws to increase the diversity of each incoming class.”

The state of California voted down affirmative action in 1996 after voters passed Proposition 209, a law that left state schools unable to consider race, gender, ethnicity or national origins as a factor in the college admissions process.

Members of the UCLA administration have agreed to meet with members of the “Black Bruins” to discuss ways they can collaborate to increase diversity at UCLA.

The students will meet with Montero, Associate Vice Chancellor of Enrollment Management Youlonda Copeland-Morgan and Tyrone Howard, a professor of education and director of the Black Male Institute at UCLA.

“(Montero) expects the meeting to be a frank exchange of ideas and information and she hopes to explore opportunities,” said Vazquez, according to the Daily Bruin.

The “Black Bruins” video raises a number of questions about affirmative action, equal opportunities and racial diversity in elite academic institutions in America. What do you think about the video?