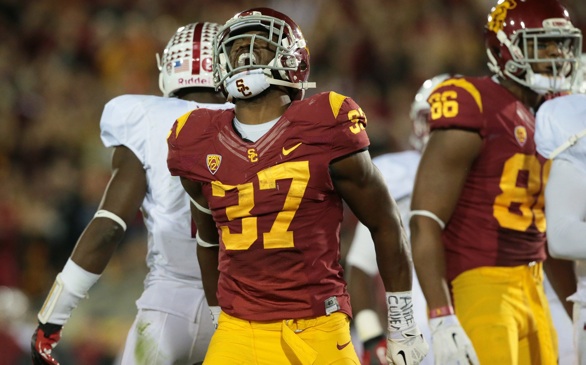 If UCLA beats both Arizona State and USC over the next two weeks, the Bruins will play in their third straight Pac-12 Championship.

“That’s the thing we ask for, the opportunity and the chance to control our own destiny,” quarterback Brett Hundley said. That’s what we have right now.”

But what if the Bruins don’t win out? There’s a chance they still end up playing for a spot in the Rose Bowl Game, though the path becomes convoluted.

The Trojans’ upset win over Stanford on Saturday put them back into the division picture. Should UCLA lose the rivalry game, though, it could still end up on top of a three-way tie via the conference’s tiebreak rules.

That occurs if: the Bruins beat ASU this weekend, but lose to USC in their regular-season finale; the Trojans lose to Colorado on Saturday; the Sun Devils lose to Arizona.

All three would then be tied for first in the division with 6-3 conference records. The head-to-head tiebreaker would be null, each team having lost to one other member of the trio.

The next deciding procedure would be their records against other Pac-12 South teams. In the three-way tie scenario, the Bruins would have only lost to USC. The Trojans would have fallen to both the Sun Devils and the Buffaloes, while ASU would carry losses against UCLA and Arizona.

Of course, none of that comes into play if UCLA loses on Saturday. The Sun Devils would clinch the division if they beat the Bruins — who have already survived do-or-die tests in Tucson and against Washington this month.

“I think you just try to take it one week at a time as much as possible,” head coach Jim Mora said. “You regroup, and you go at it hard again. These are young, resilient kids.”

The Bruins’ offensive line has started three true freshmen for four straight games, and will likely do so through the rest of the season.

At this point, they’re no longer the default reason for any offensive struggles — hardly the case when Hundley struggled in losses at Stanford and Oregon.

The redshirt sophomore is now the second-most accurate quarterback in the Pac-12, just 0.02 percent behind Oregon State’s Sean Mannion with a 67.82 completion rate. He has gone three games without an interception, the longest stretch of his career.

“I think you guys have seen in the past couple of weeks, he’s gone back to start to really have a lot of trust in his line,” offensive coordinator Noel Mazzone said of Hundley. “For a few weeks, there wasn’t that trust. I think he’s really feeling good about those guys.”

“All I do is sit back there and throw the ball,” Hundley said. “They do all the work.”

UCLA defensive lineman Kylie Fitts will have surgery on his hand today, according to his Twitter.

His absence should not have a marked impact on the defensive line, which caps most players at roughly 30 snaps per game. Fitts has notched one tackle this season.

He also missed part of spring practices with a sprained ankle, and part of fall camp due to dehydration-related cramps.